One of our favorite excursions was also a free one.  We took a shuttle from McKinley Chalet Resort to the park to visit the National Park Service sled dogs.  The NPS sled dogs are quite different from the racing dogs we saw at Caribou Crossing in the Yukon.  The NPS dogs are working dogs and, as such, are not built for speed but for endurance. Because of the harsh winters virtually the only way into the wilderness is by dog sled.  The rangers can spend weeks in the the wilderness and depend on the dogs to get them in and around the park.  During the spring and summer, though, the dogs take it easy and provide an opportunity for tourists to interact with real working sled dogs. 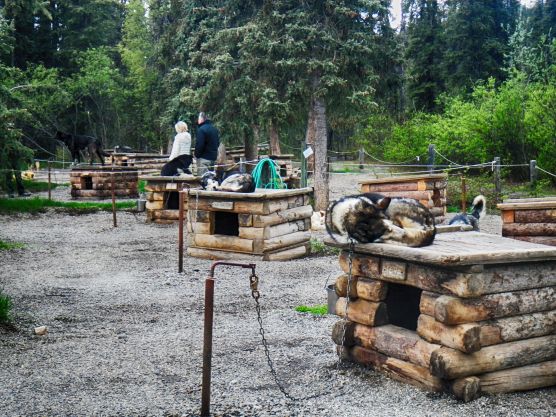 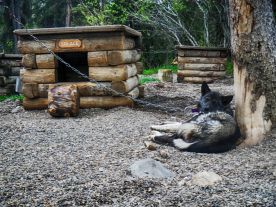 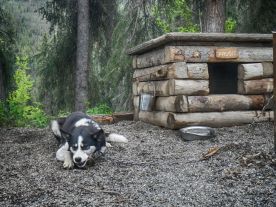 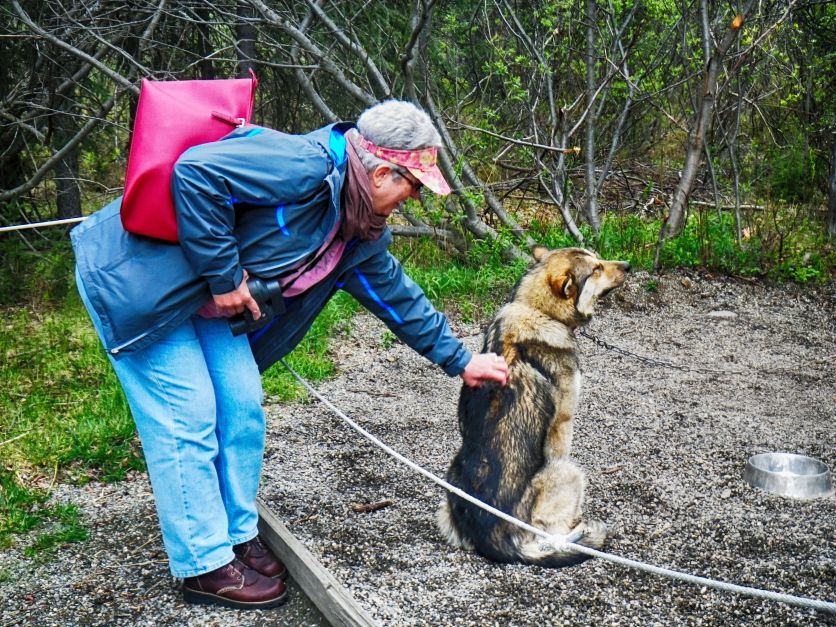 As part of the visit to the dogs, the park rangers put on a short but informative sledding demonstration.  It’s obvious from the demonstration that the dogs love what they do.

A few words about the dog sled team.  Each dog on the team has a job and they’re assigned that job based on their physical abilities and their personality.  Here’s the team from our demonstration. 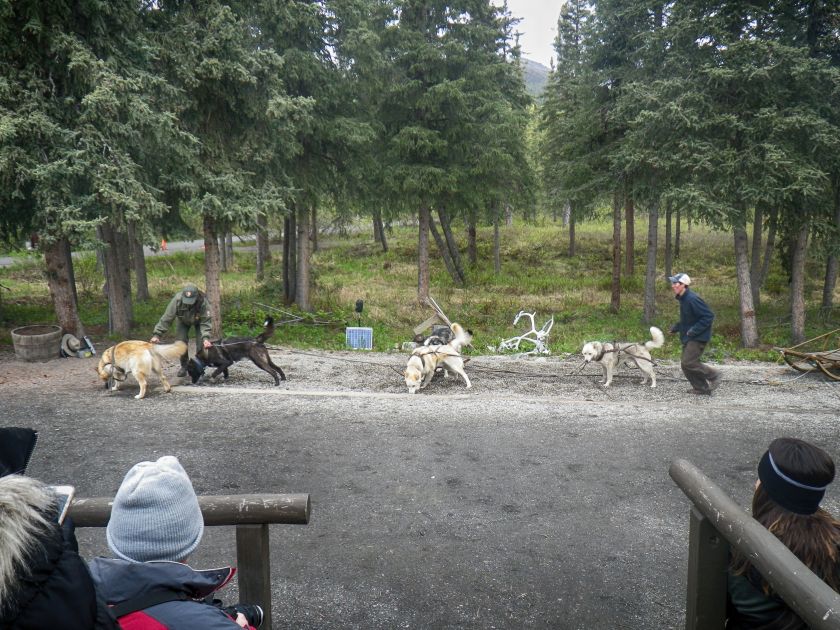 The front row contains the lead dogs.  Lead dogs steer the team and set the pace.  Qualities of a good lead dog is intelligence, initiative and the ability to find a good trail in bad conditions.

The second row are the swing dogs.  These dogs help swing the rest of the team along the turns of the trail.

The dog closest to the sled is the wheel dog.  The wheel dog needs to be calm and intelligent, so that it is not startled by the movement of the sled.  They also need to be able to help guide the sled around tight turns.

So that’s the team.  The sled they  pull during the demonstration is an actual working sled, but without the couple hundred pounds that can be loaded on the sled for long excursions into the Alaska wilderness.  The all wood sled has not changed much since men began using sleds and dogs for transportation in Alaska. 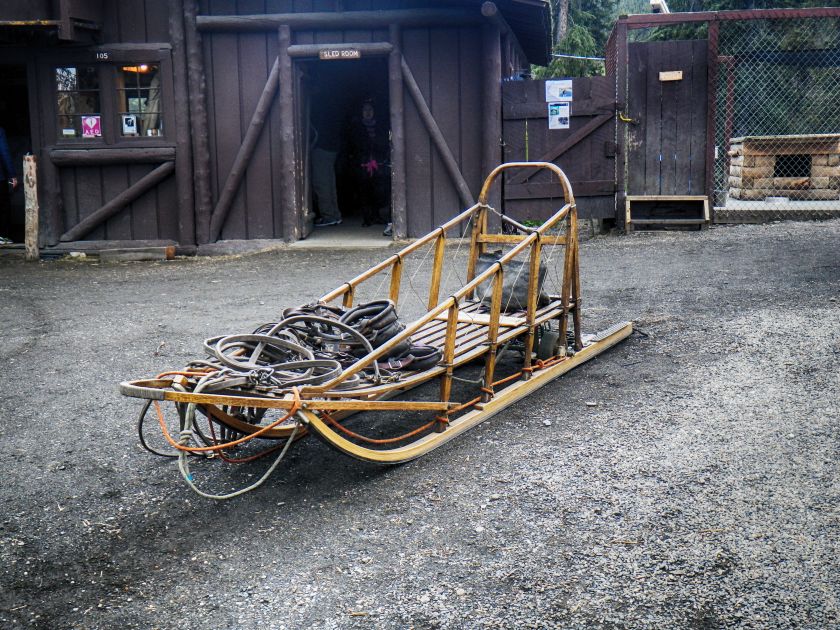 The actual mushing demonstration only lasted a minute but it was obvious that the dogs enjoy their job.  Once they were done with their 60 seconds of work the dogs were rewarded with a treat and laid down to enjoy it while a park ranger explained the ins and outs of the life of an NPS sled dog. 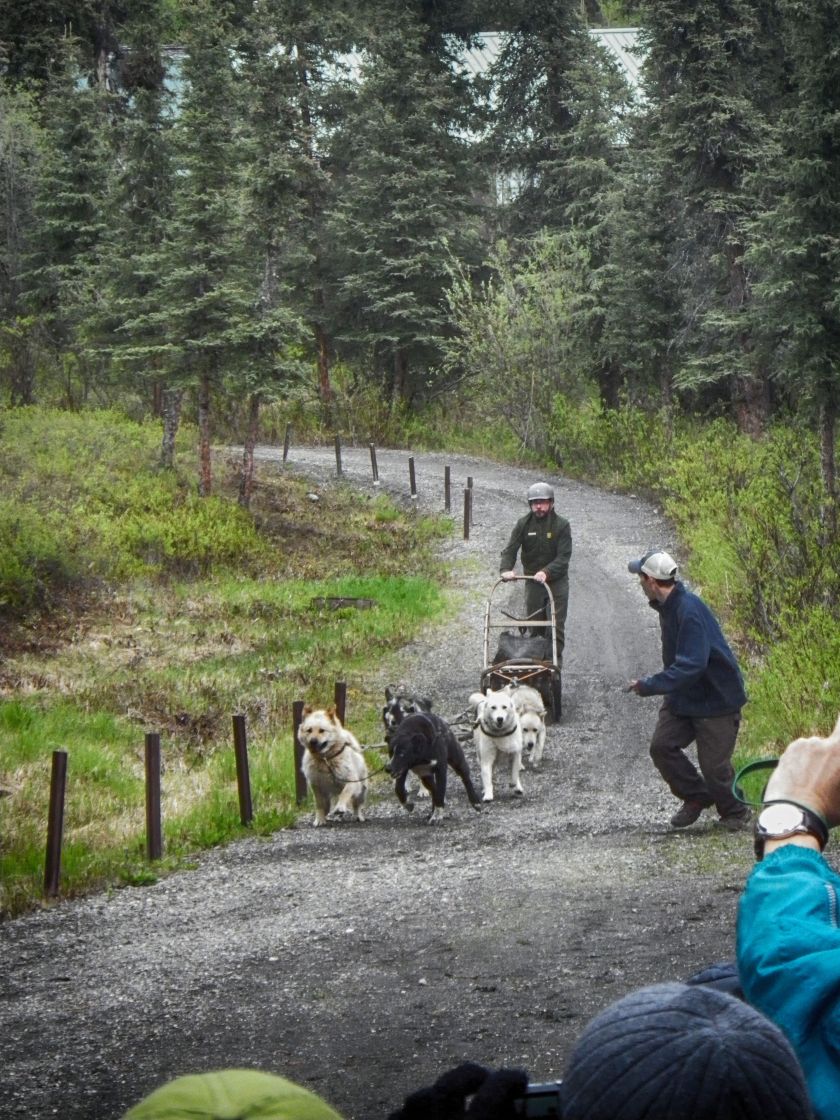 In case you’re interested, the NPS sled dogs are retired at age nine.  By that time they’ve traveled more than 8,000 miles under harness.  So what happens to the dogs once they’re retired?  They’re adopted to suitable homes.  Keep in mind that the years of sledding have kept these dogs in top condition and the energy and intelligence of the dogs may not be a match for the casual dog person.  But if you’re used to high energy and intelligent dogs and can give one of these dogs the home it needs, please consider adopting.