We made a day trip to Guimarães from Braga.  This beautiful city is a historically significant place, known as “the birthplace of Portugal” because Afonso Henriques, Portugal’s first king, was born here.  The castle, though, has a history older than even the founding of the country. 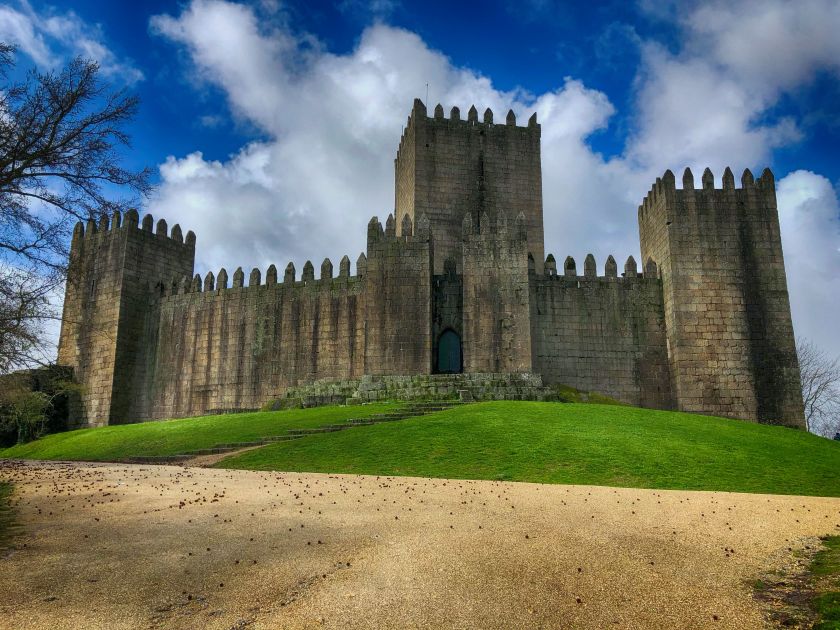 Guimarães was founded as Vimaranes in the 9th century.  It may have been named for the first ruler of the County of Portugal, Vimara Peres, who ruled the county from this area.  There’s a beautiful statue of Peres at the Cathedral in Porto.

In the 10th century,  Countess Mumadona Dias, the most powerful woman in the Northwest Iberian Peninsula, ruled the County of Portugal from Guimarães.  A devout woman, she had he Monastery of Guimarães built.  To protect the monastery from raids by the Vikings and the Moors, she had a castle built on the hill overlooking the monastery in the place where the Castle of Guimarães now stands.

In 1096 Alfonso VI, King of León and Castile, gave the County of Portugal to Henry of Burgundy as dowry for his marriage to Alfonso’s daughter, Teresa.  Henry expanded and remodeled the castle.  It was here that his son, Afonso Henriques, the first king of Portugal, was born.

The castle was remodeled once more at the end of the 13th century, this time by King Dinis.  This is the castle that exists today.  Over the next several centuries, though, the castle fell into ruin until, in 1836, a plan was made to demolish the castle and use its stone to repave roadways.  Fortunately, the plan was never carried out.  In 1910 the Castle of Guimarães was declared a National Monument and in 1937 the first of several restoration projects was started.

The castle sits high above the city and provides some great views of the surrounding area.  It was built as a military fortification, and withstood several sieges during its early history.  The green space around the castle would not have existed during its use as a fortress; all of the trees and shrubbery would have been removed to eliminate hiding places for enemy invaders.

There are eight towers surrounding a central keep.  The keep would have been where the castle’s owner would live.  The walls and towers would provide a shield for them from any attacks.

The castle is adjacent to two other national monuments- The Igreja de São Miguel do Castelo and the Palace of the Dukes of Braganza.  The palace can be seen from the castle walls.

The Igreja de São Miguel do Castelo is a tiny church in the shadows of the castle.  Legend has it that this is where Afonso Henriques was baptized.  That may be stretching history a bit as the first reference to the church wasn’t until the 13th century.  A restoration project at the end of the 19th century took place and then, in the 20th century, several more projects were carried out to restore the church to its original medieval character.

The area of the castle, the palace and the church are part of the historical center of Guimarães and is designated a UNESCO World Heritage Site.  There’s a lot of history here in the Birthplace of Portugal.