The Abby Aldrich Rockefeller Folk Art Museum, in Williamsburg, Virginia, is the world’s oldest continually-operated museum for the exhibition of American folk art.   The museum has been collecting and exhibiting folk art since it opened in 1957 and now holds over 7,000 pieces of folk art.

On our last visit to Williamsburg, we were lucky to be able to view their dollhouse collection.  The dollhouses ranged from a dollhouse constructed from a wooden crate and filled with handmade furniture to an elaborate, and huge, dollhouse White House.  The dollhouses were made to be played with.  There’s a little farm, complete with animals and fences, and a wonderful cardboard castle. 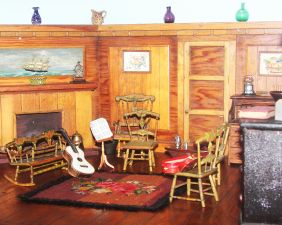 While the White House was quite impressive, I was much more taken with the more “play friendly” pieces.  They were designed to be played with, not as a display piece.  If I were a child, I’d want something I could actually touch rather than just look at.

The museum is full of wonderful works of art.  We’ve been there several times and there’s always things we haven’t seen before.  If you visit Williamsburg, I highly recommend a visit to the Abby Aldrich Rockefeller Folk Art Museum.  You won’t regret it.