These wonderful sculptures were part of the collection at the now defunct Chinqua Penn Plantation near Reidsville, North Carolina.  Built in the 1920s by tobacco magnate Thomas Jefferson Penn and his wife Betsy, it was once one of the best preserved early twentieth homes in North Carolina.  Eventually, the financial failures of the last owner led to the foreclosure of the property and the sale, at auction, to all of the wonderful art that had been collected by the Penns.

We were able to visit the home a few years before it was sold, while it was still a tourist attraction.  The Penns had collected many works of art from around the world.  These  particular sculptures were outside the gift shop and winery.  I love the expressions on the faces. 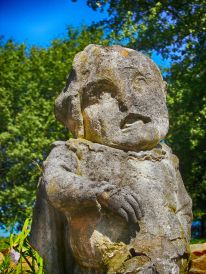 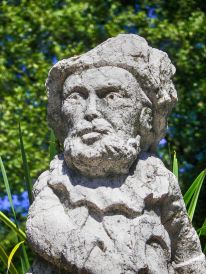