Ponte de Lima is one of the oldest towns in Portugal.  The town’s beautiful bridge, which spans the River Lima, goes back to Roman times.  Ponte de Lima’s ties to the Romans is reflected in the legend of the River Lima.

Around 139 B.C., the Romans had turned their attention to conquering the Celtic tribe of Gallaeci, who controlled Hispania.  It was a hard fought campaign, covering what is now Spain and Portugal.

According to legend, when the war-weary Romans first reached the Ria Lima they mistook it for the River Lethe, the river of forgetfulness and one of the five rivers of Hades.  The soldiers, afraid that the water would cause them to lose all memory, refused to cross the river.  The Roman commander, General Decimus Junius Brutus Callaicus, frustrated that the river was impeding his military campaign, 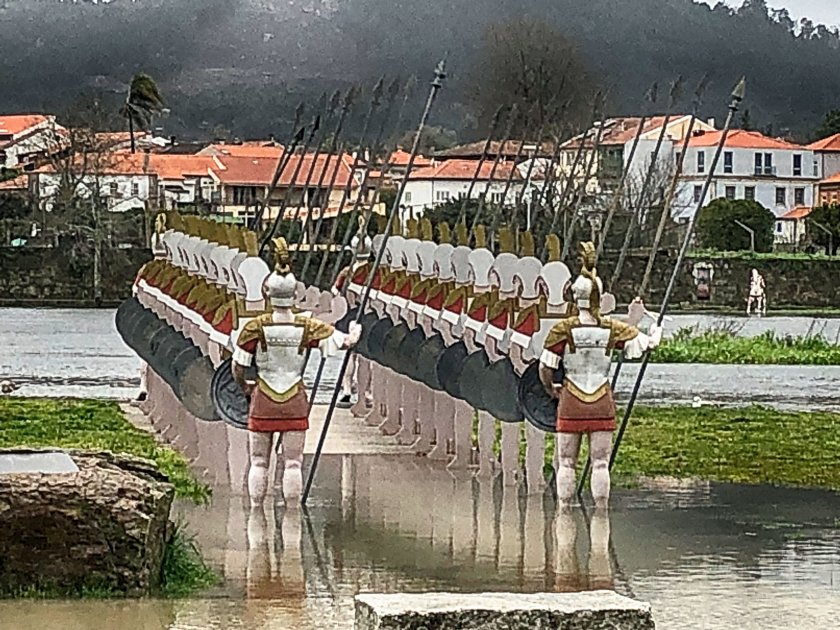 rode across the river.

Despite seeing their commander on the opposite bank of the river, the soldiers were not convinced. The General then began to call each of the men by name.  The troops, astonished that their commander had retained his memories, crossed the river to join their fearless leader, their fears dispelled and their memories intact.

Today the legend is celebrated by a display of statues along the river banks- the troops on the near bank and the general on the opposite side of the river.