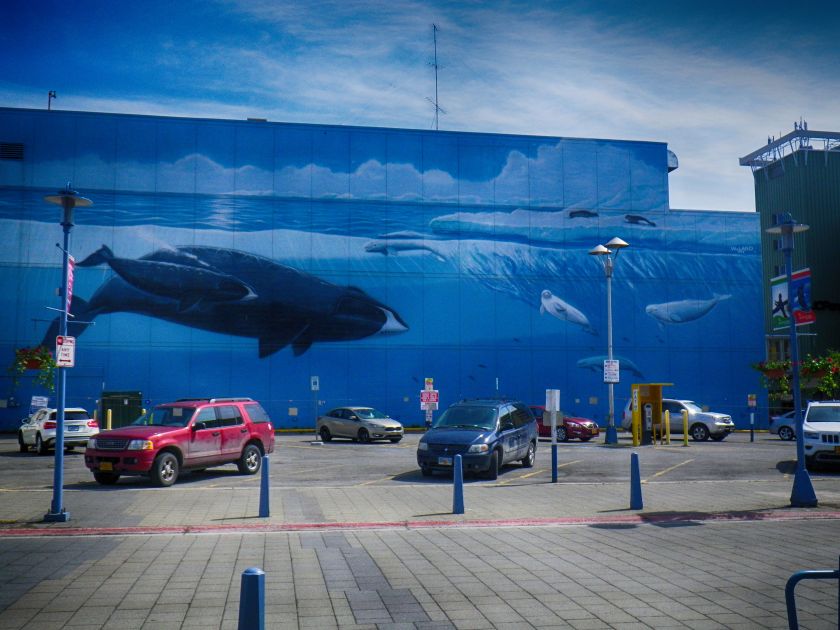 The second is the Flatiron sculpture, designed by artist Reed Todd, and located at the end of Wall Street.  It’s a giant replica of the kind of irons used by laundries and housewives at the turn of the 19th century.

Asheville is one of my favorite places to go. Art and music are everywhere in this great little city.  It’s also known for it’s food and many great local breweries.  To top it off, it’s a very progressive city, friendly to people from all walks of life. All in all, Asheville is a great place. 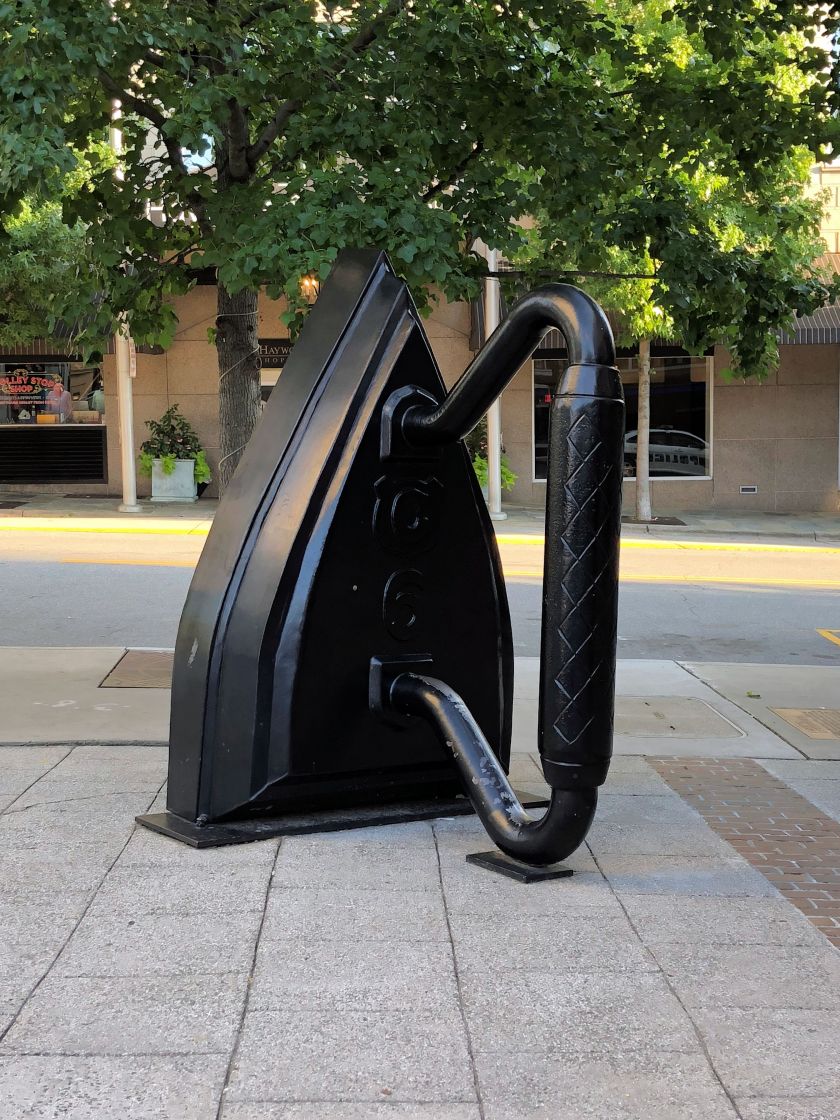 Collapse is a piece by South African sculptor Ladelle Moe.  It’s a huge work of concrete and steel and measuring 30 feet long.  I love the way it seems as if a giant being simply collapsed and has become a part of the landscape.  It’s an impressive work.  The NC Art Museum Park is full of great works of art like Collapse. 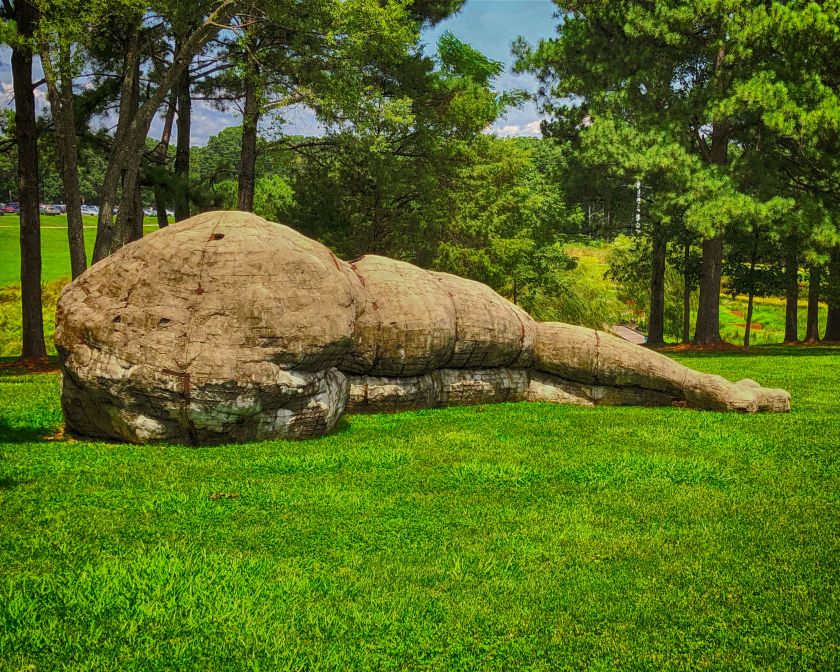 Askew is a 46′ tall sculpture by American artist Roxy Paine.  Paine uses industrial  materials, in this case steel, to create sculptures that seem to have sprung from nature, albeit with a twist.

Askew is a part of Paine’s series called “Dendroids.”  After extensive research on how trees grow, and based on a language he invented that describes how these trees “grow”, the artist assembles the Dendroids from steel.  The effect is quite striking.  The sculpture, while obviously man-made, feels natural in the way the branches reach out from the trunk.  It’s fascinating to see birds perched on the branches of the sculpture, as if it were a real tree. 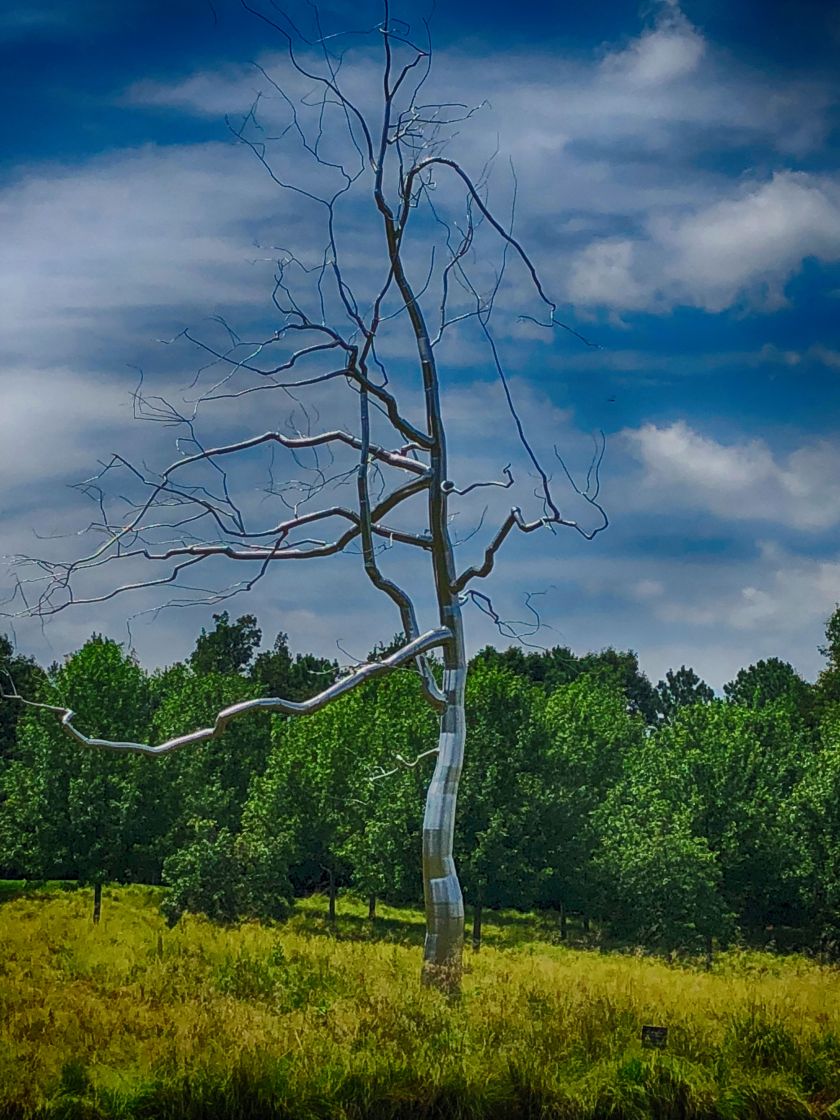 During the last 30 years of his life, French Impressionist Claude Monet spent many hours in his garden at Givenchy.  His eyesight clouded by cataracts, Monet created one painting after another of his beloved water lilies, producing around 250 oil paintings of the flowers.

I found these water lilies in the Rodin Garden at the North Carolina Art Museum in Raleigh.  I love the quiet peacefulness of the garden and was struck by the beauty of the water borne plants. I spent a few minutes watching the little blue dragonflies touch down on a lily pad, only to take flight again a few seconds later.  It was time well spent. 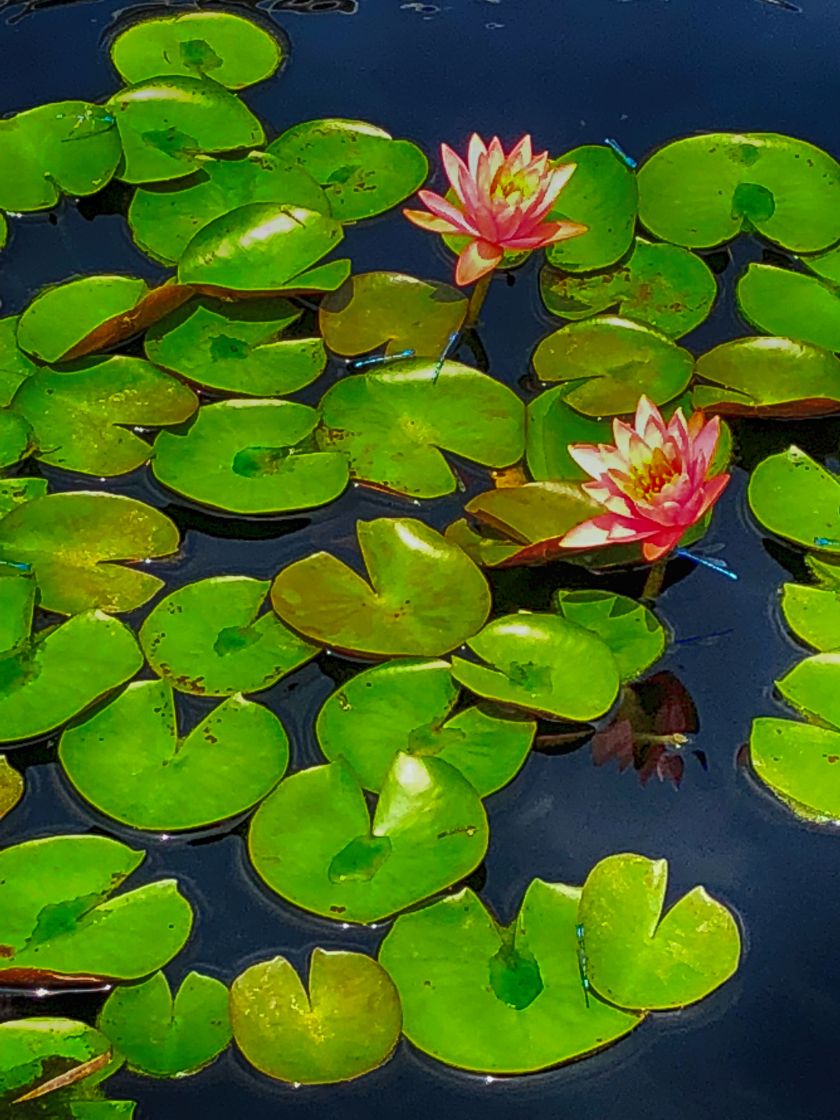 This ethereal work of two heads- a mother and daughter- by award winning Spanish artist Jaume Plensa  was installed at the North Carolina Museum Park in April 2017.  The wire mesh construction and size make it difficult to determine race or gender, creating a kind of universal portrait.

Plensa’s art has been exhibited worldwide, from Sweden, Spain and France to Chicago and, now Raleigh.

Art amazes me.  I love the way the artist can make these 13-foot tall steel mesh heads feel fleeting and lighter than air.  The expressions on the closed-eyed faces also impart a dream-like feel.  Finally, due to the mesh construction, the sculptures seem to change as you view them from different angles.  I never tire of looking at them. 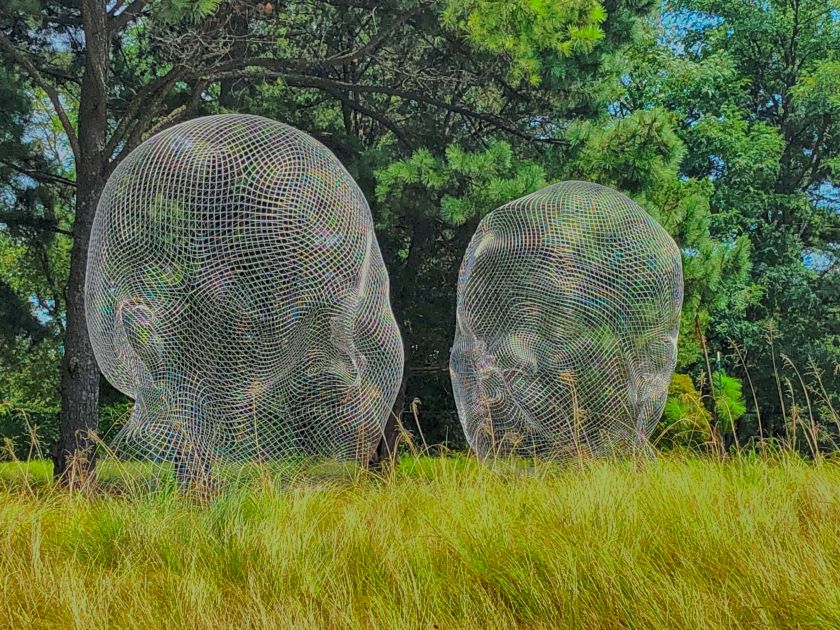 North Carolina folk artist Vollis Simpson didn’t start creating his whimsical sculptures until he retired.  Making use of his skills as a mechanic and using rigs he developed as a house mover, Simpson began creating huge kinetic sculptures out of scrap metal.  The creations were based on weather vanes and handcrafted “whirligigs” that could be found on barns and in yards across the South.

Simpson’s art has been widely recognized.  Four of his whirligigs were displayed in Atlanta during the 1996 Olympic Games.  Museums from the North Carolina Art Museum to the Folk Art Museum in New York City have displayed his sculptures.

Simpson passed away in May 2013, at the age of 94.  A month later the North Carolina House and Senate designated his whirligigs as the State Art of North Carolina.

The Vollis Simpson Whirligig Park was opened in December 2017.  The park has about 60 of the colorful whirligigs, which were relocated from fields of Simpson’s farm.  It can be almost hypnotic to watch the many moving parts slowly rotate in the wind.  We visited on a sunny day, but the park has special lighting so that at night the many reflectors attached to the sculptures catch the light and recreate the effect of car lights reflecting off the whirligigs as they drove past in the dark. 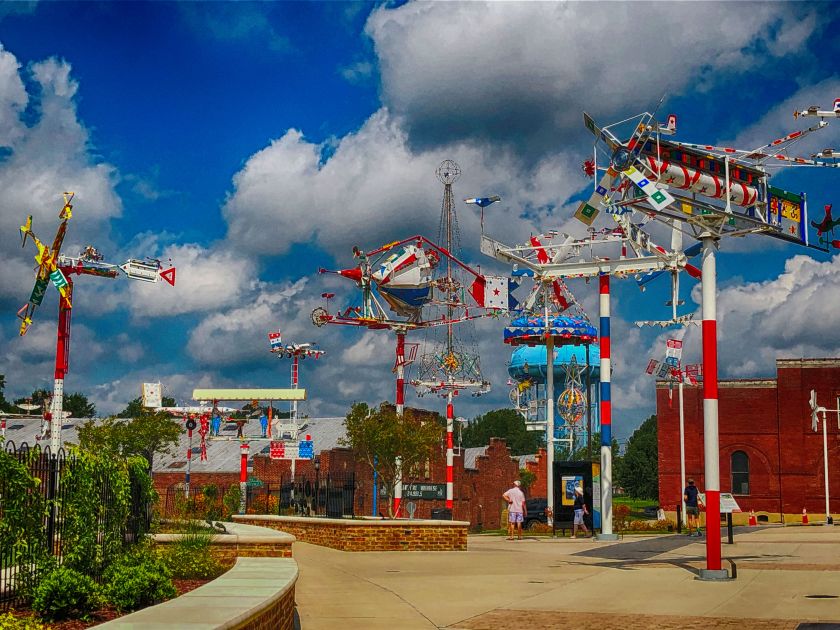 This interesting little structure is called Cloud Chamber for the Trees and Sky and was designed by British artist Chris Drury.  It’s an interactive artwork.  You enter the chamber, close the door and sit quietly in the dark until your eyes adjust.  There’s a tiny hole in the roof that serves as a pinhole camera.  Once your eyes adjust you can see the trees that surround the Cloud Chamber projected on the walls of the chamber.  It uses nature to create art.

The Museum Park at the North Carolina Museum is full of interesting artwork.  There’s also an amphitheater where moves are shown and concerts are held.  We’ve had some wonderful evenings at the park, watching a movie while, many miles away, lightning puts on a free light show against the clouds. 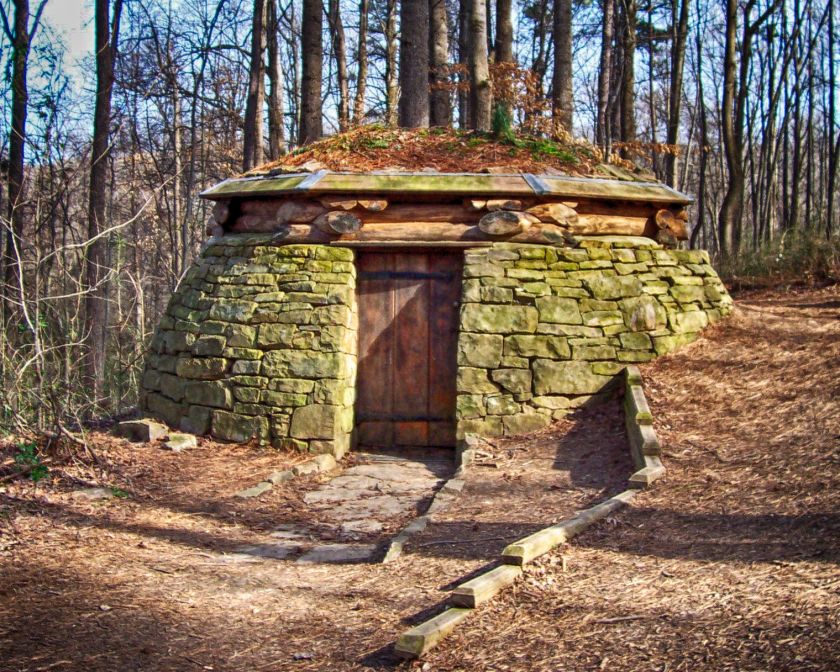 Born in Guimarães in 1939, José de Guimarães is one of Portugal’s most important artists of contemporary art.  His art is exhibited all over the world.  The small art gallery at the Dukes of Braganza Palace is dedicated to the city’s most famous artist, and has a great selection of his work. 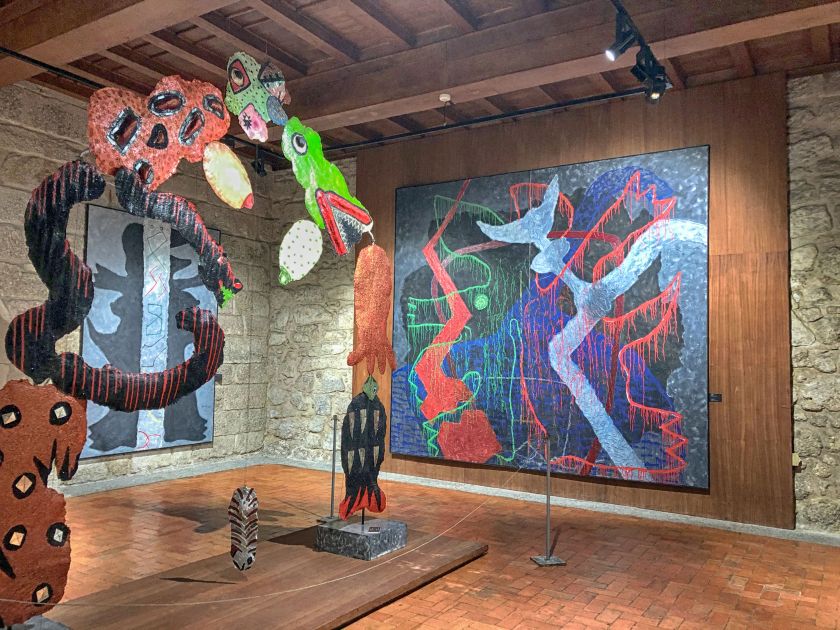 There’s art of all sizes and styles in Portugal.  These little sculptures are on the wall at the fortaleza.  They’re simple and colorful and a bit whimsical and perfect for a view of the beach from the fort. 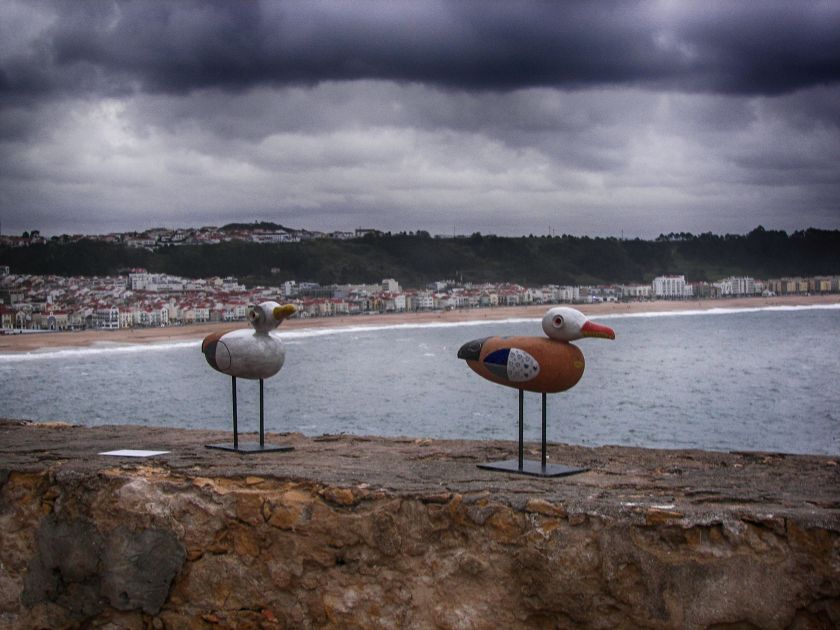