As a photographer I found the Portuguese streets fascinating.  They’re not like what we have in the United States, where everything is two or more lanes of automobile traffic.   In Portugal, many of the streets, especially in the old sections of town, were very narrow and primarily used for foot traffic rather than cars.  Keep in mind that many of these roads were around for centuries before the automobile was invented and they were built to last.  In America we’re constantly patching and repaving and widening our roads.  We’re a throwaway society and we don’t expect permanence from anything- even from our roads.

Combra’s Rua do Quebra Costas was a great example of the wonderful streets to be found in Portugal.  For centuries Rua do Quebra Costas was a primary means of ascent from the lower town to the upper town.  Nicknamed “the Backbreaker” for its steep ascent, the street begins at the Barbican Gate, one of the last remnants of the wall that protected Old Coimbra from attacks by the Moors, and ends in front of the Sé Velha (old cathedral).  Much of it is a series of steps which makes it impassible for automobile traffic.  That’s fine with me.  It’s a strenuous walk full of wonderful surprises along the way.

As you make the walk from bottom to top, look for two sculptures by artist André Alves, Fado de Coimbra, which celebrates the beautiful music of Coimbra, and Tricana de Coimbra, an homage to the women of the city, seen in the photo below. 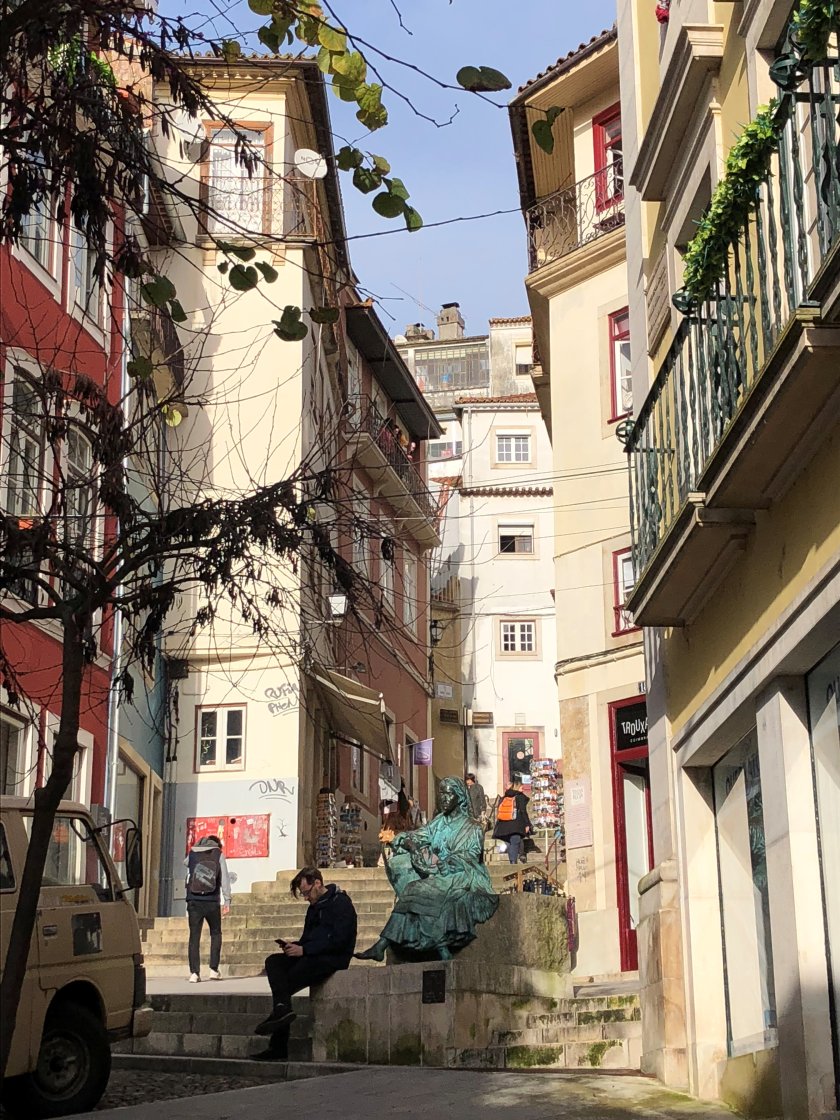 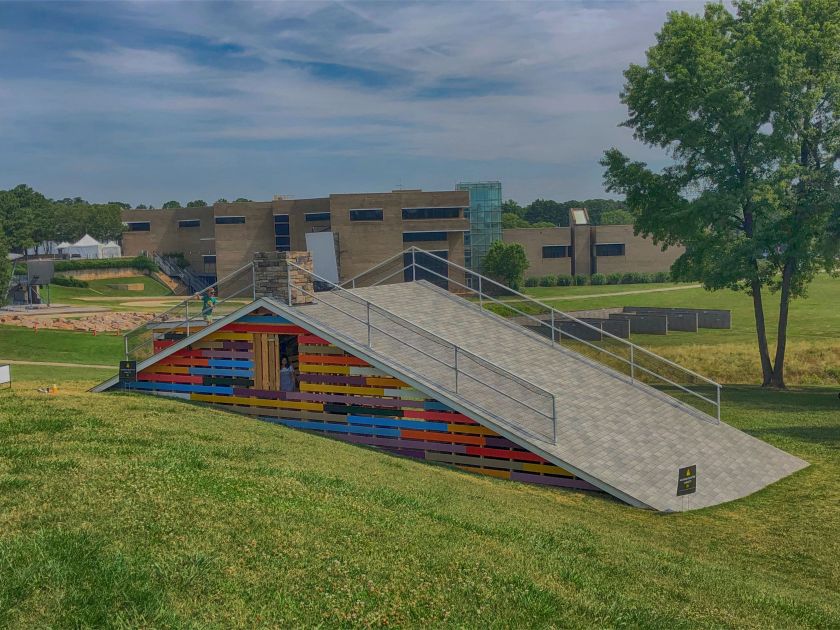 Standing Figure: Knife Edge, by British sculptor Henry Moore, is yet another of the many great works of art on display at the North Carolina Art Museum in Raleigh.

While an abstraction of a human body, the nearly 12-foot tall bronze is based on the shape of a bird’s breastbone.  During the planning stages of the work Moore would pinch clay onto a bone to develop the shape of the sculpture. Once Moore was happy with the shape, a head and base was added.

I love the placement of this work.  The natural bone-like shape and the beautiful green patina of the bronze contrasts nicely with the clean angular lines of this space outside the West Building at the museum. 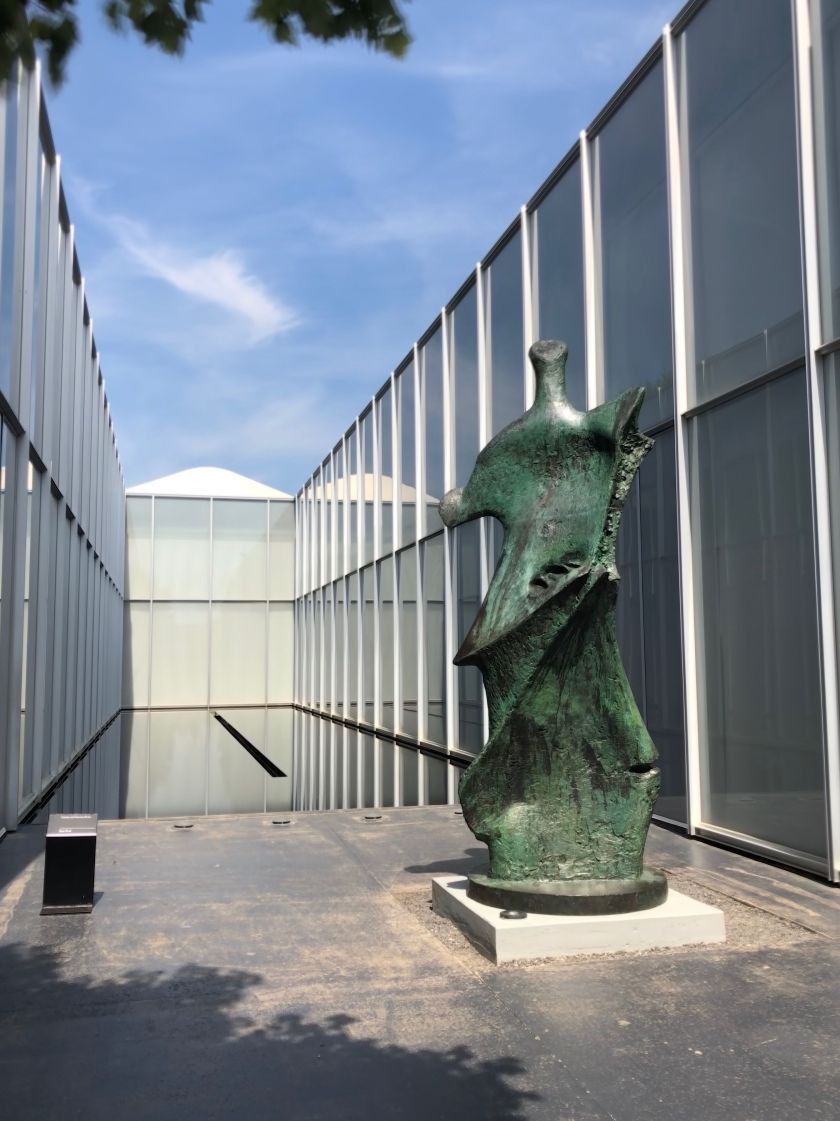 This beautiful bronze sculpture is located in a reflecting pool in the North Carolina Art Museum’s North Garden.  While it’s an abstract work, there’s no doubt that it’s a fish, a subject that’s near and dear to the artist.

Prosek is an American artist, writer, and naturalist.  An avid fisherman, Prosek co-founded World Trout, a conservation effort to preserve native trout species worldwide.  His first book, Trout: An Illustrated History, was published while he was still a student at Yale University.  His paintings of fish are collected in several books, and his documentary about 17th century author and angler Izaak Walton won a Peabody Award in 2002.

If you’re a fisherman and would like to learn more, World Trout can be found at Patagonia. 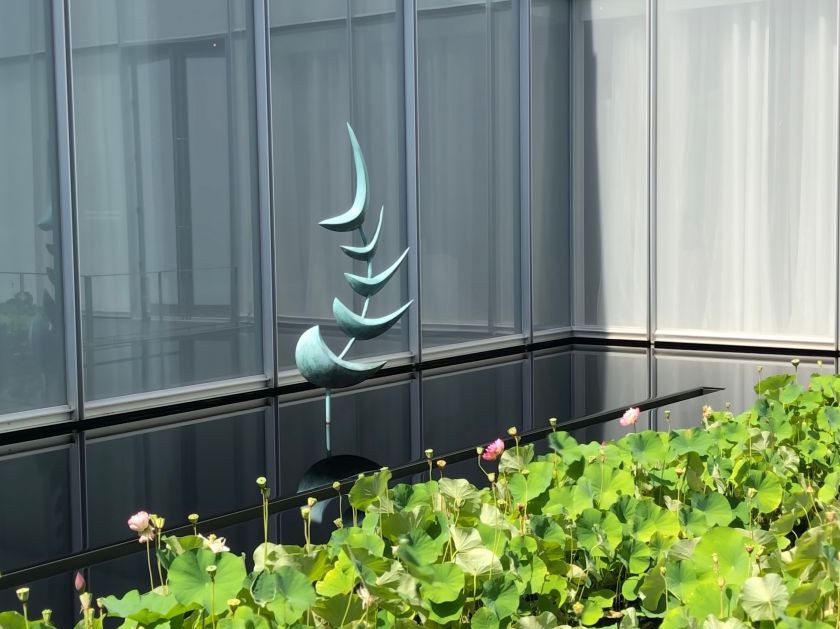 I love the North Carolina Art Museum.  There’s always something that I haven’t seen before, both inside and outside.  I took a walk around the West Building and discovered a sculpture that’s new to the museum.  Lunar Bird, by Spanish artist Joan Miró, is a wonderfully whimsical work of art on loan from the Hirshhorn Museum and Sculpture Garden in Washington, D.C.

Miró’s work is, to my mind, magical.  While he never associated himself with a style, Miró is most often described as a surrealist, with French poet and co-founder of the surrealist movement, André Breton, describing Miró as “the most Surrealist of us all.” 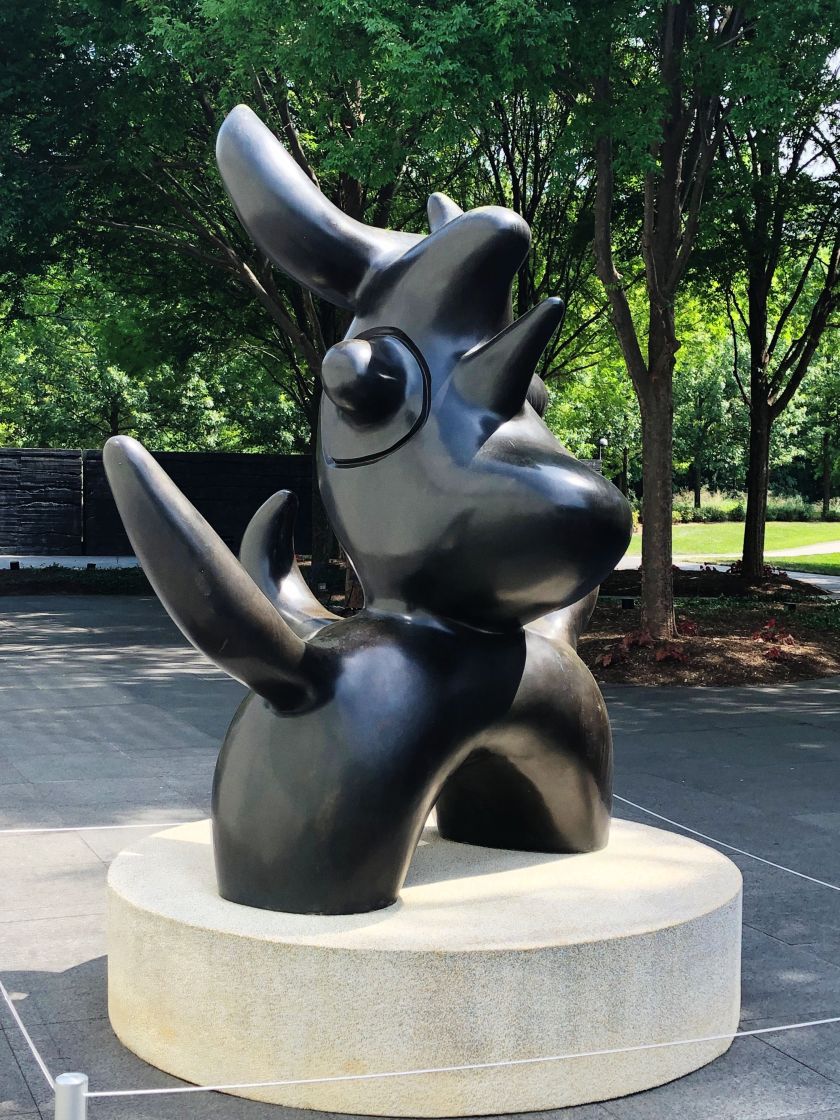 This sculpture is my favorite work of art by Auguste Rodin.  Despite the dark inspiration behind the piece, I find it strikingly beautiful.

The Three Shades are a representation of the tortured souls of the damned, or shades, who stand at the gates of Hell in Dante’s Inferno. The three identical figures point to an inscription that reads “Abandon hope, all ye who enter here.”

Originally created for Rodin’s monumental work, “The Gates of Hell,” several versions of the Three Shades were created, both in plaster and in bronze.  While the plaster versions of the work are quite beautiful, I think the dark patina of the bronze is more appropriate to the darkness of the subject.  This one is located in the Rodin Garden at the North Carolina Art Museum. 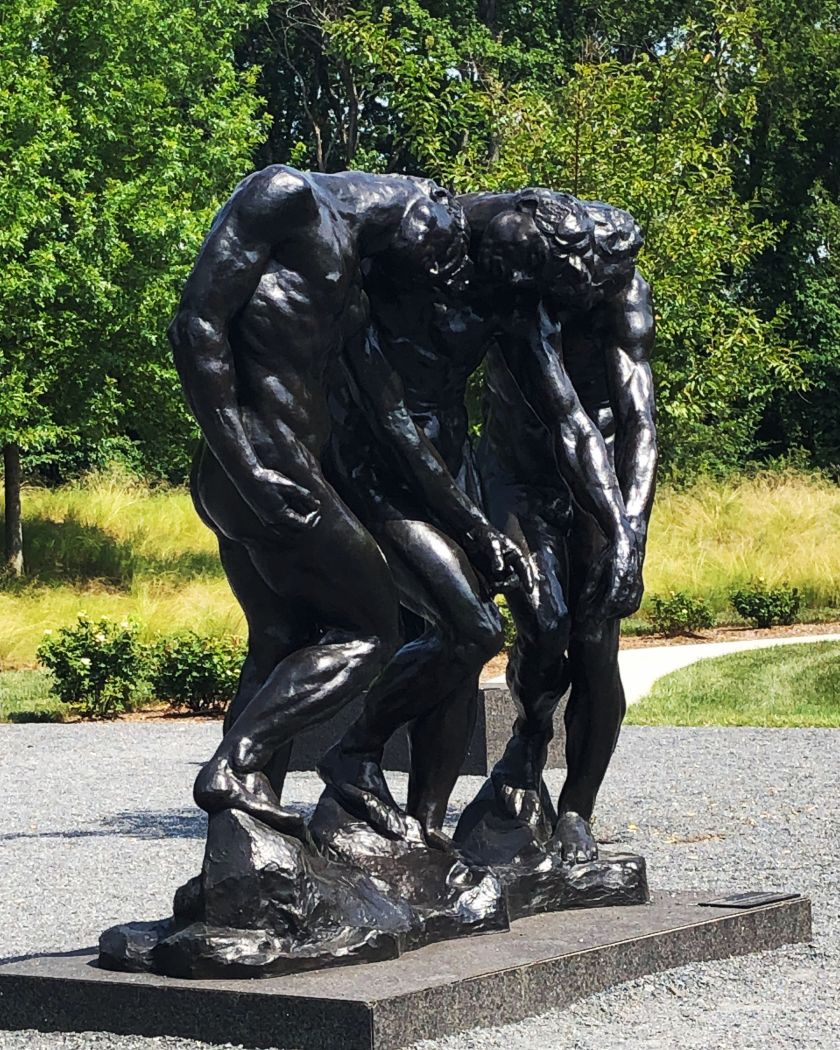 Here’s another photo that was better in black and white than in color.  Atlas, an art deco sculpture by artist Lee Lawry, has stood in front of Rockefeller Center in New York City since 1937.  In the original photo, the statue was a bit lost in all the tan of the building and the shadows creeping in from the left.

I like the black and white version much better.  The shape and details of the sculpture show much better, particularly the muscles as Atlas struggles to support the world on his shoulders.  I also think the the way  the windows and doorways reach upward while the angles of the buildings center their weight on the globe are an interesting contrast. Finally, I like the way the tree branch frames the top of the photo and brings a bit of nature into an otherwise man-made environment. 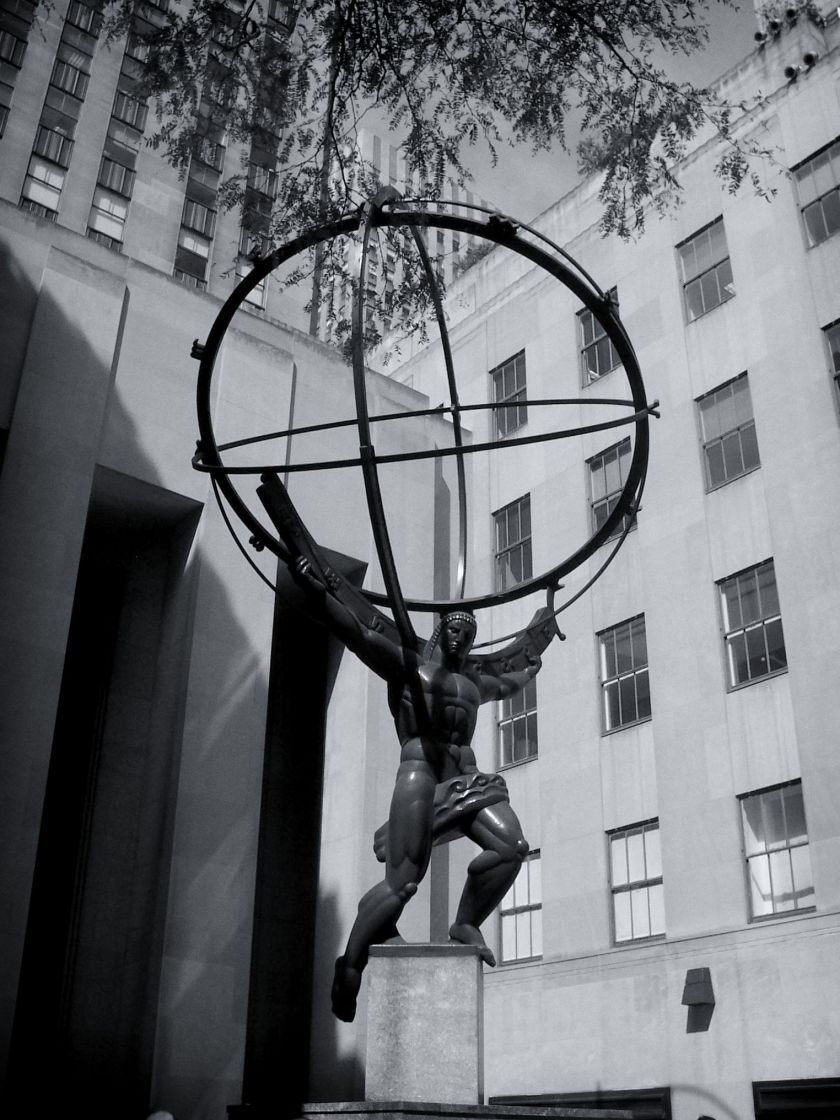 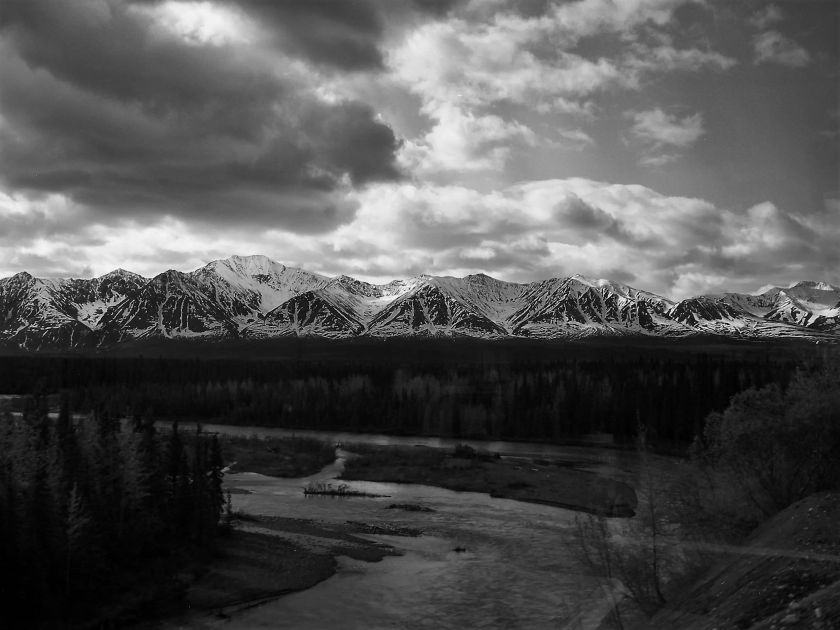 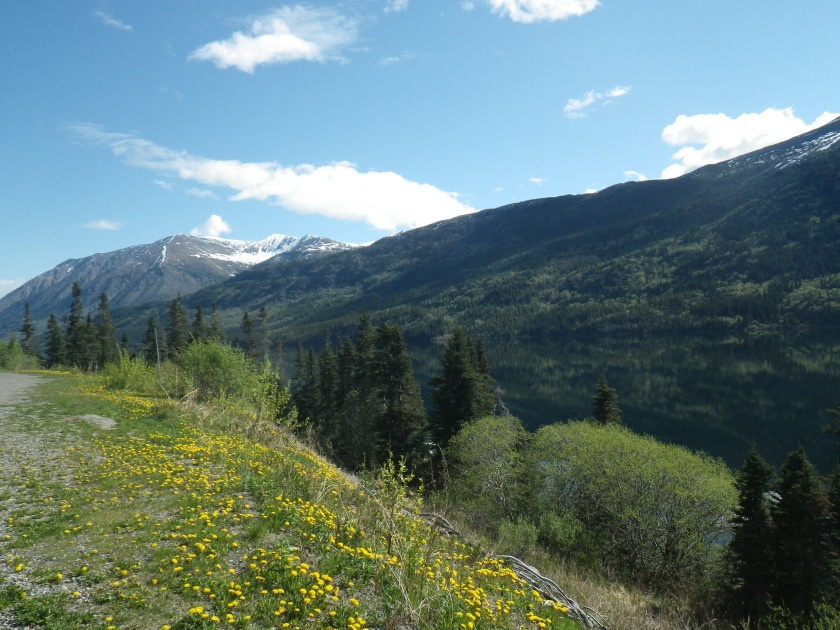 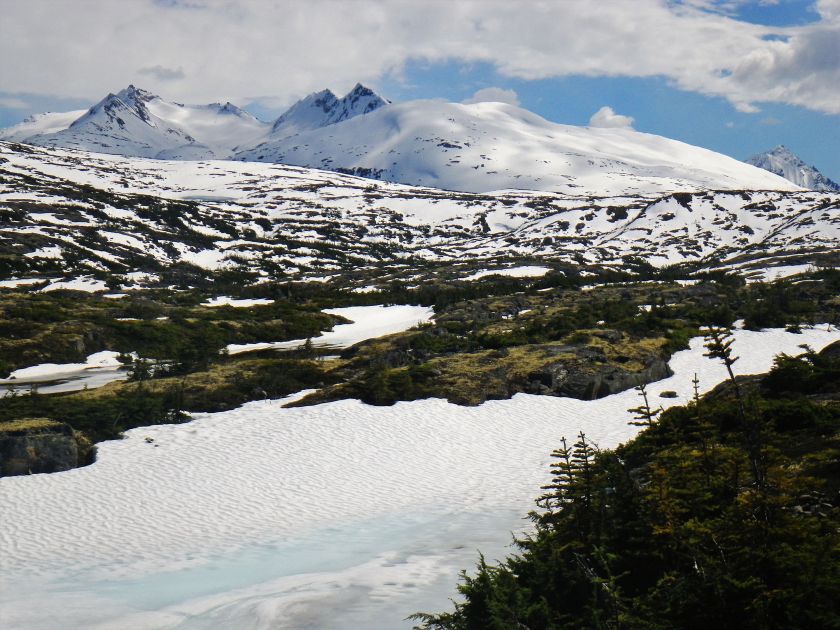 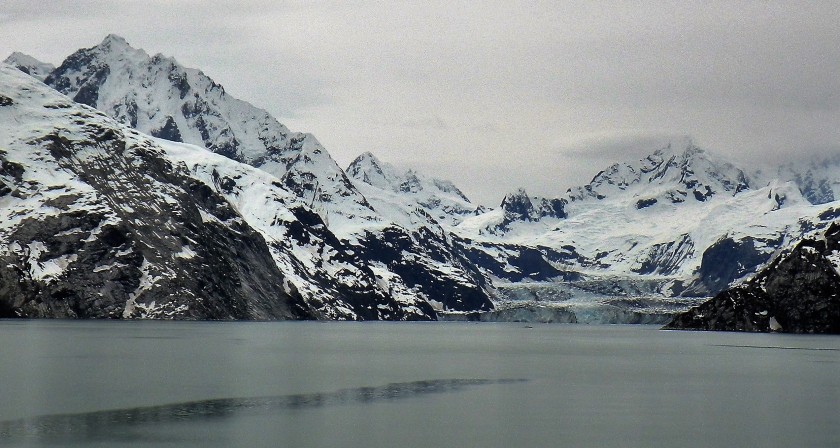