My wife and I are pretty adventurous with food.  Whenever we travel we do our research and find outstanding restaurants that offer something we can’t get at home or from a chain.  San Antonio was no different.

Ann Marie did the research this time.  Since we were in Texas, we figured this was our chance to get real Texas Barbecue.   Smokin’ Joe’s of Texas was the restaurant she decided on.

In Central Texas, the emphasis is on the meat, which is usually beef.  The meat is usually seasoned with salt and pepper only, though occasionally other spices are used.  Sauce is optional and is served on the side.  That’s the style we found at Smokin’ Joe’s.

We didn’t know what to expect but, from what we had seen around the River Walk, I expected a large fancy restaurant along the lines of Republic of Texas Steakhouse.  What we found was much more fun.

Smokin’ Joe’s is a tiny place tucked between a used car lot and an equally tiny Mexican restaurant.  The outside is typical Texas, with two giant six shooters displayed under the sign.  Once inside, we were greeted by a nice lady at the register, who I think was Joe’s mom.  Joe came out when we ordered and visited for a few minutes.  It’s truly a family operation.  There was Joe, his mom and one other gentleman in the kitchen.

It’s not fancy, but Smokin’ Joe’s isn’t a here today- gone tomorrow joint.  Joe has been smoking meat in San Antonio for over 35 years and his restaurant has been open since 2010.  Joe knows what he’s doing and, he’s not going stop any time soon.

Everything was very good.  The meat was really nice and the sides- baked beans and watermelon, in my case- were great.  The sauce was really just to add a little moisture to the meat, but wasn’t really needed.  In Texas, it’s the meat that counts, not the sauce.

The stars of the show, though, were the desserts.  We had a slice of lemon cake and a slice of Black Russian cake, and shared them.  They were both incredible.

Our visit to Smokin’ Joe’s was just what we were looking for.  We found traditional Central Texas barbecue, a relaxed atmosphere, friendly people and good food.  I’d say that I’d recommend this little barbecue place to people, but it’s too late.  I’ve already started telling people check out Smokin’ Joe’s. 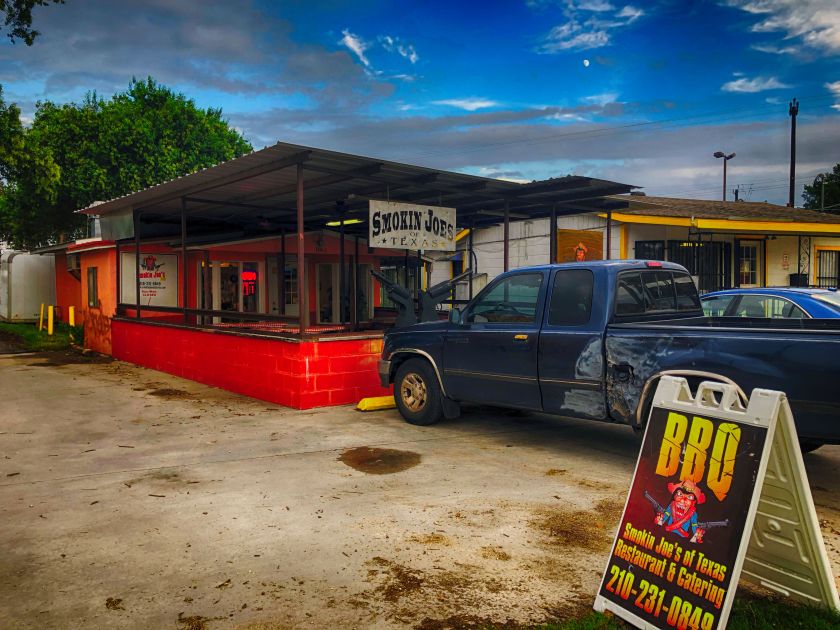