This beautiful structure has a long history.  It is believed to have been designed by Italian architect Nicolau Nasoni, a long-time resident and the designer of the Clérigos Church.  Construction started in 1737 but, due to lack of funds, the original plan was scaled back and the construction was not completed until near the end of the 18th century.

The palace was once the residence of the Bishops of Porto.  The patio between the palace and the cathedral provides a great view of the Ribeira, Vila Nova da Gaia, and the Douro River. 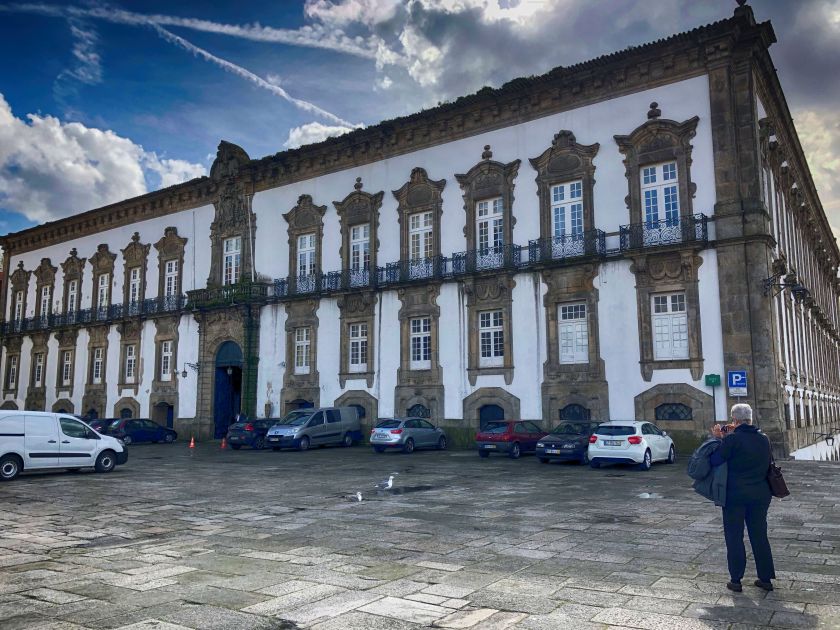 I love this photo because of the way the Santa Just Lift and Carmo Convent tower above the rooftops.  I also like the saturated colors you can get in overcast weather.  The blue umbrella, the orange raincoat and the yellow van all give a bit of pop to an otherwise monochromatic scene.

By the way, in my opinion, Tram 28 isn’t worth the time.  We waited about 90 minutes in the rain to get a spot on the tram and then it was standing room only, so you can’t really see a lot  Yes, it’s inexpensive and it passes some great places, but I would suggest riding one of the less popular trams.  We rode a couple and had a much more enjoyable ride. 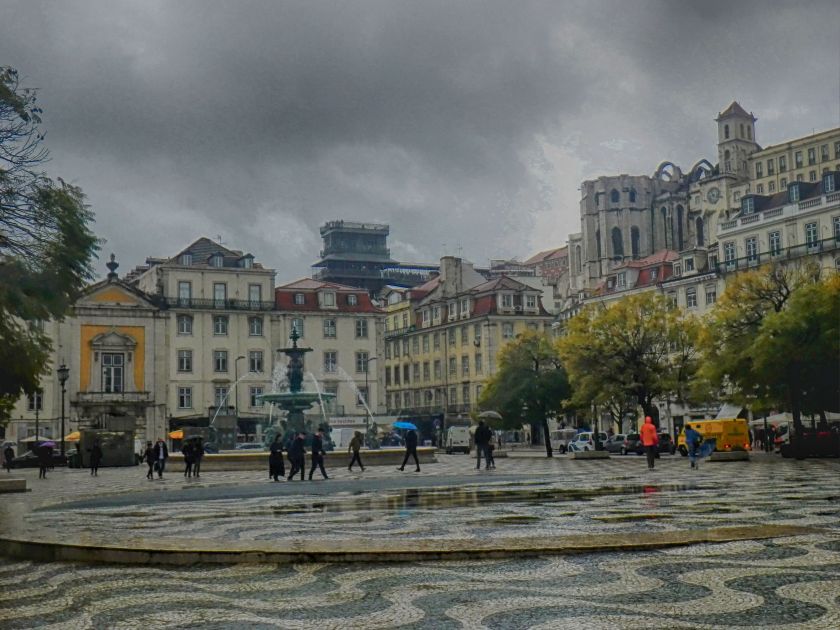 I like this photo of the Sé do Porto.  You get a glimpse of the loggia designed by Nicolau Nasoni, but my favorite is the statue of 9th century nobleman Vimara Peres, the first ruler of the County of Portugal and the way he seems to be saluting the cross at the top left of the photograph.

Porto was one of my favorite stops on our Portugal visit.  I’m looking forward to the day when we can wander the city’s streets again. 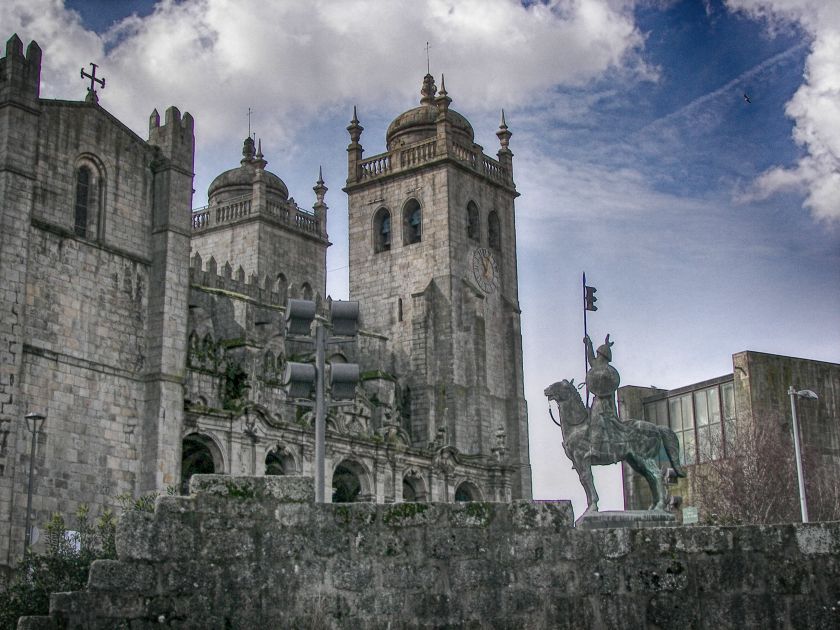 I love this photo of Ponte de Lima’s namesake bridge.  While most of the bridge was built in the 14th century to adjust for changes in the path of the river, the section on the north side of the bridge does, in fact, date from Roman times.

The day we visited Ponte de Lima was quite rainy, hence the umbrellas in the photo.  I love the bright yellow umbrella in the center of the photo against an otherwise grey image.  I also love the yellow lights that hang above the bridge.

Ponte de Lima is a wonderful little town and well worth a visit. 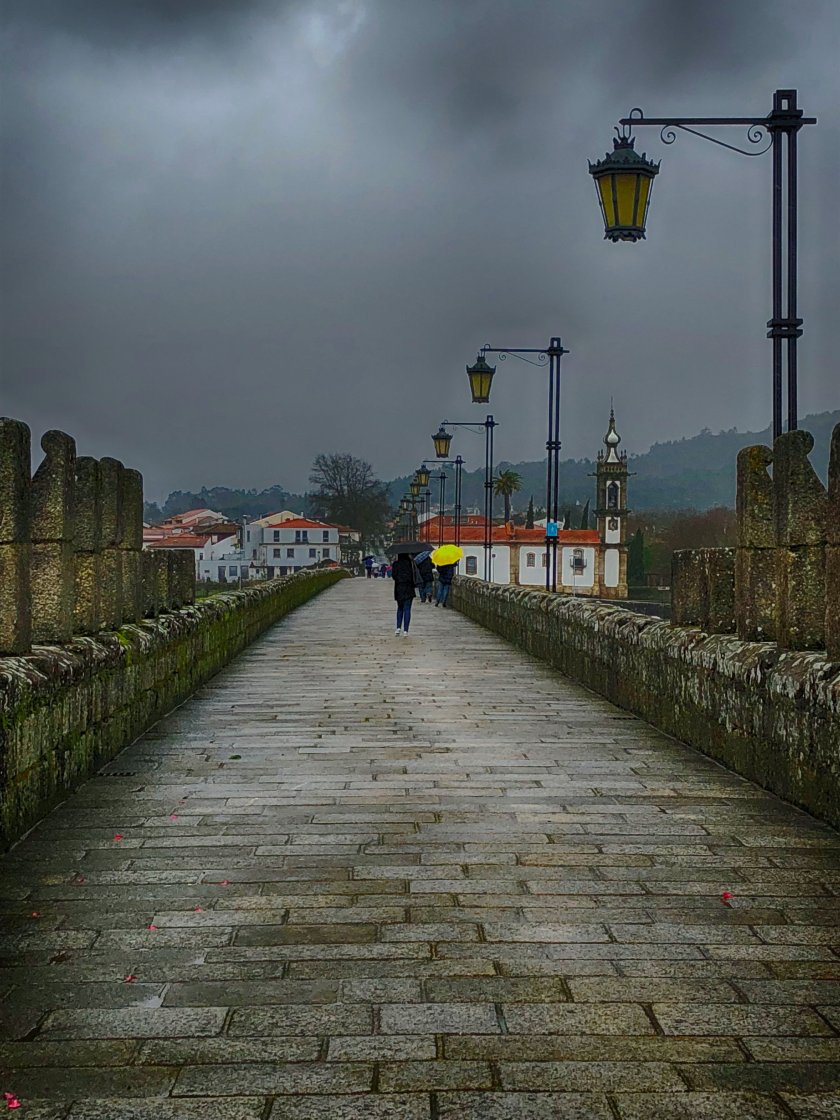 The immense Torre dos Clérigos towers over its surroundings and is a central point on virtually all views of historic Porto.  The baroque tower was designed by Italian artist and architect Nicolau Nasoni in the mid-eighteenth century.

Nasoni lived and worked in Porto for fifty years and designed many beautiful structures in Porto and throughout the north of Portugal.  Besides the Clérigos Church, Nasoni designed and built the loggia on the Porto Cathedral, the Episcopal Palace, Palace of São João Novo, and the Palace of Freixo, all located in Porto.

It seems that no matter where you are in Porto, your eyes are drawn to the magnificent tower. 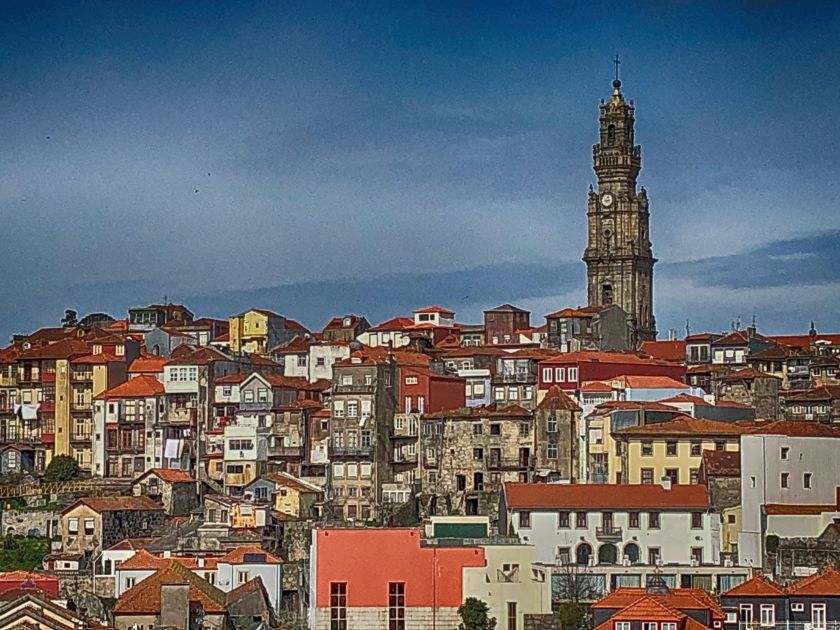 There are so many things to see and do at the Velha Universidade in Coimbra that the Minerva Stairs are often overlooked.  One of two entrances to Pátio das Escolas, the huge courtyard at the center of the Old University, the Minerva Stairs opened in 1724, the stairway is named after the Roman goddess of wisdom, whose image tops the gate.

The entrance to the self-guided tour of the Joanine Library is located at the bottom of the stairs, so if you take the tour, be sure to turn around and check out the beautiful staircase you just descended. 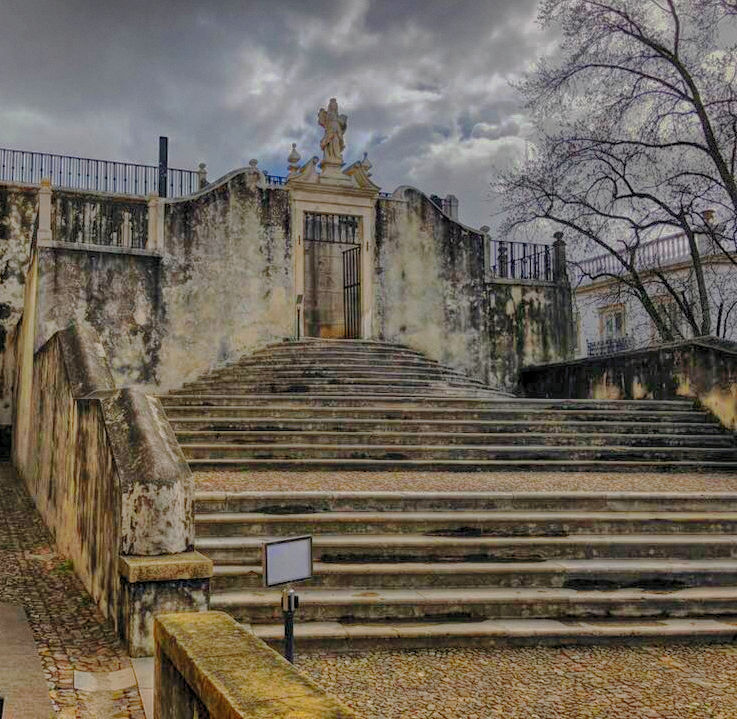 Long before Nazaré was became famous for it’s world class surfing, the town earned its livelihood as a fishing village.  Today it’s a popular seaside destination with a beautiful beach, great seafood, and, of course big wave surfing.

We spent a couple days there during the off-season so the beaches were devoid of the crowds you’d experience during the summer months.  Nazaré was the first stop, after Lisbon, on our tour of Portugal and it was a great introduction to the people, food and culture of this wonderful little country.

While fishing in Nazaré is still an important part of life in the town, the boats are now moored in a new harbor rather than on the beach and are much more modern than the fishing boat in this photo. 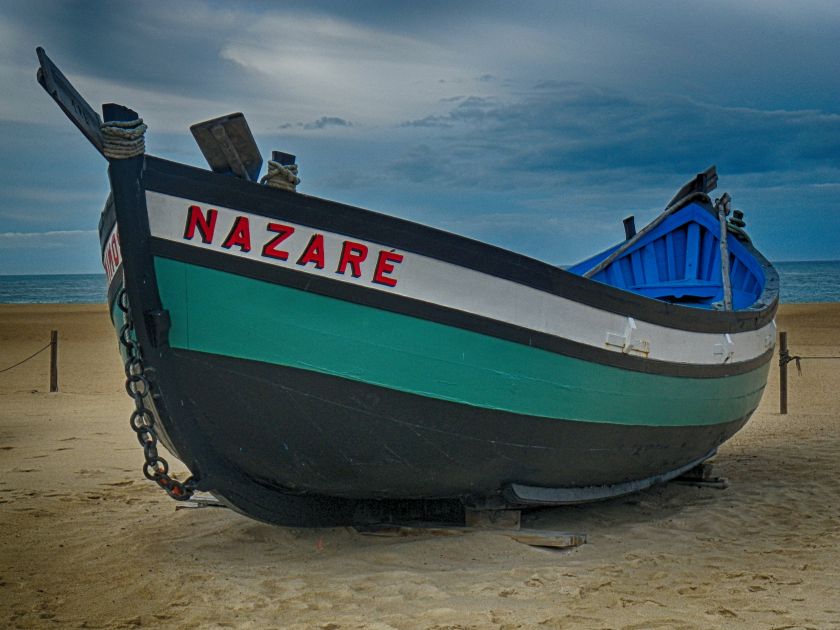 Another stop on our Portugal trip was a visit to one of the most beautiful bookstores in the world, Livraria Lello e Irmão.  Opened in 1906 by brothers José and António Lello, the bookstore is now a protected historic building.  Famous for its interior, the building’s Art Nouveau exterior is no less impressive.

Livraria Lello has, in recent years, become an attraction for fans of the Harry Potter franchise.  Rumor has it that J.K. Rowling was so inspired by the beauty of the library’s central staircase that she based the fantastical staircases of Hogwarts on them.   Livraria has fully embraced the notoriety, even occasionally hosting Harry Potter themed “Dinner for Fans” nights.

There are negatives to all the attention, though.  The bookstore has become crowded with tourists visiting the site that inspired Hogwarts rather than coming to buy books (and yes, I realize that I was one of those tourists).  Access is now controlled by a doorman and the bookstore has begun charging an admission fee (which is refunded with any book purchase).

For me, the bookstore was so crowded that our visit was much less enjoyable than I had expected.  Bookstores are something to be savored, lingering over the shelves to discover something new and interesting.  I’m not sure how people manage to actually browse the bookshelves at this point.  I would have loved to experience this beautiful bookstore before the notoriety. 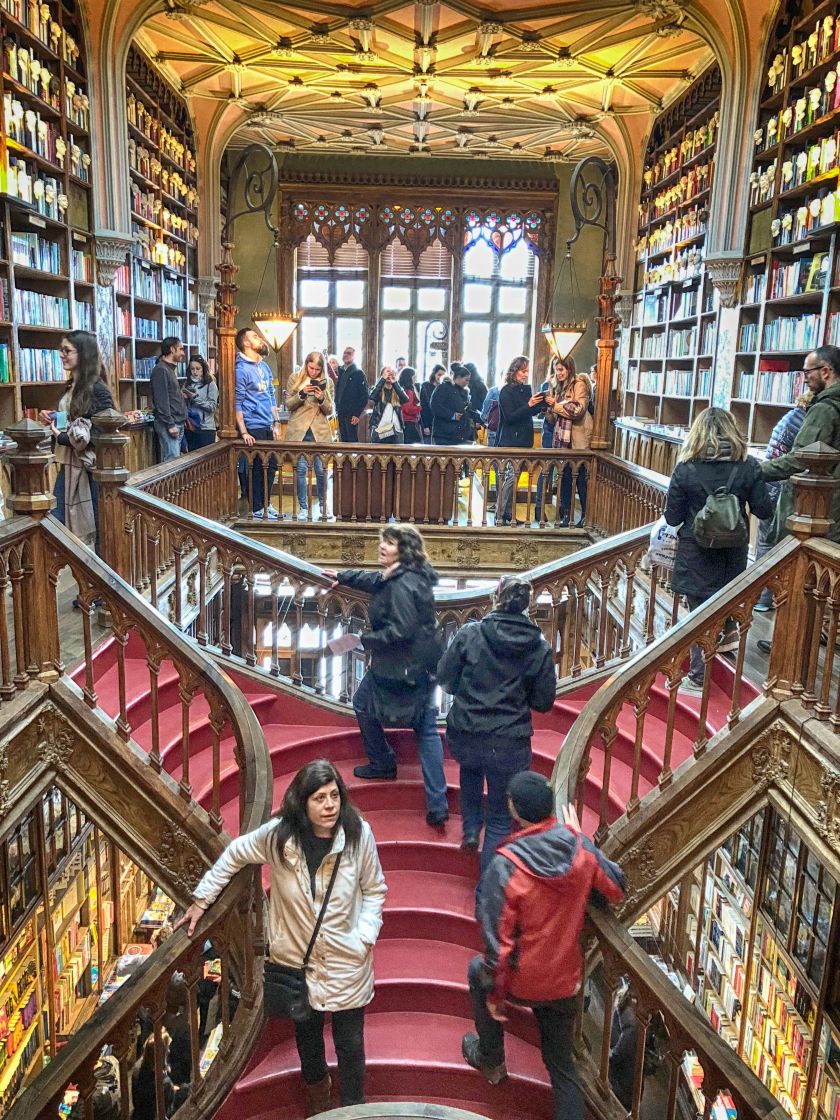 One of my favorite stops on our Portugal trip was São Bento Railway Station in Porto.  Opened in 1916, Porto’s train station is one of the most beautiful railway stations in the world.

The vestibule of the station is what makes it so special.  Over 20,000 azulejo tiles adorn the walls.  The tiles are the work of Jorge Colaço, an important Portuguese artist who specialized in painting large murals using azulejos.  The walls are covered with blue azulejos depicting scenes from Portugal’s history.  Polychromatic tiles border the ceiling and show scenes from the history of transportation in Portugal.

São Bento Railway Station may look like a museum but it’s a working railway station with lines to Braga, Guimarães, and Aveiro as well as being the starting point for the scenic Douro Line. 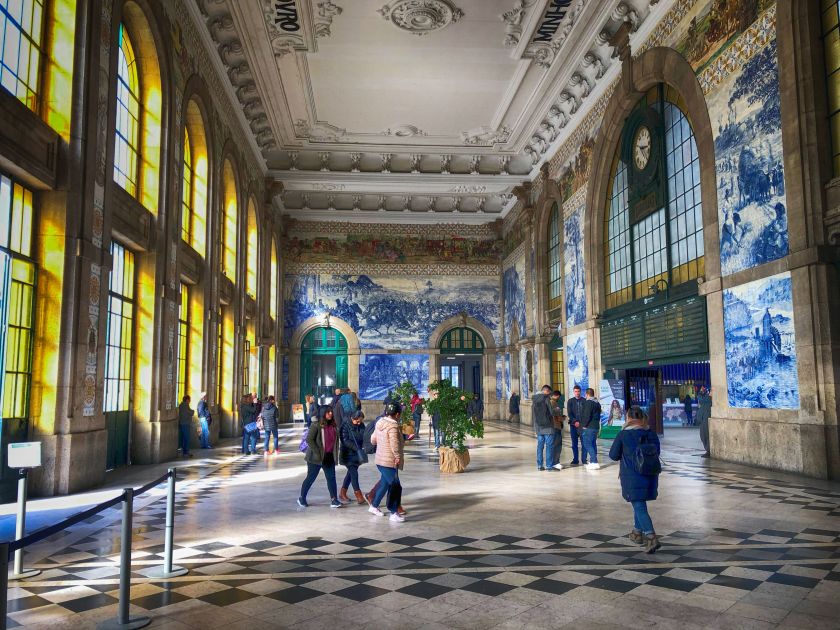 You can read Part 1 here and Part 2 here.

The Beyond, an exhibit that celebrates the art and influence of American artist Georgia O’Keeffe, was recently at the North Carolina Art Museum.  O’Keeffe’s art was on exhibit as well as the work of artists who were influenced by O’Keeffe.  This is the third part of my visit to the exhibit.  You can read the first two parts at the links above.

Just as O’Keeffe’s work spanned many different styles and subjects- from landscapes to florals to pure abstracts and even sculpture- the artists whose work is on display with O’Keefe’s are varying in style and subject.    The three artists here are interesting because of the cultural influences that come from their multi-ethnic backgrounds.

Negar Ahkami is an Iranian-American artist who mixes Persian art and cultural traditions with modern influences to create wonderfully fantastical art.  Her painting, The Source, is a great example.  You can see references to the tile art and the elaborate architecture of the Middle East as well as the storytelling traditions of Persia.  You can also find the American influence in the beach scene, where sunbathers enjoy a day with the city’s skyline behind the.  It’s an interesting juxtaposition of a Western scene that would not be acceptable in most of the Middle East against traditional Persian influences.  It’s a beautiful work of art. 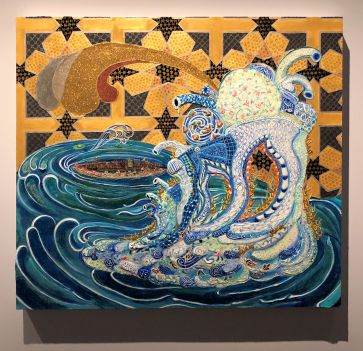 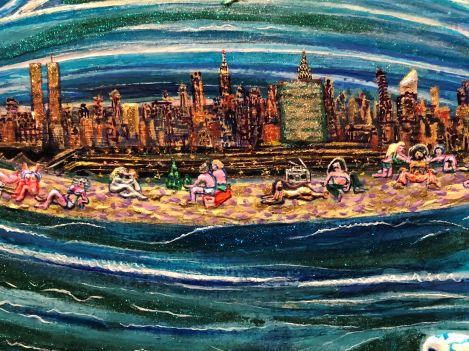 Californian artist Anna Valdez has been influenced by her experience at archaeological excavations, where she used sketch books to record and map her findings.  The two works on display as part of The Beyond are still-life that act as a visual record or catalog of the scene.  The O’Keeffe influence can be seen in the use of the deer skull in this beautiful painting, titled Deer Skull with Blue Vase. 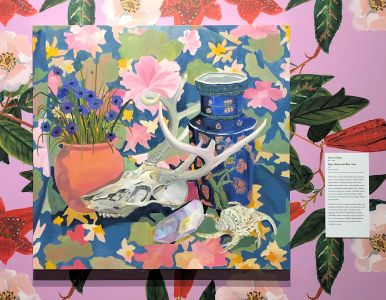 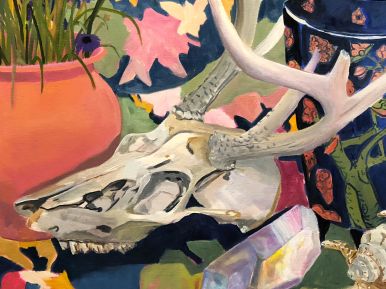 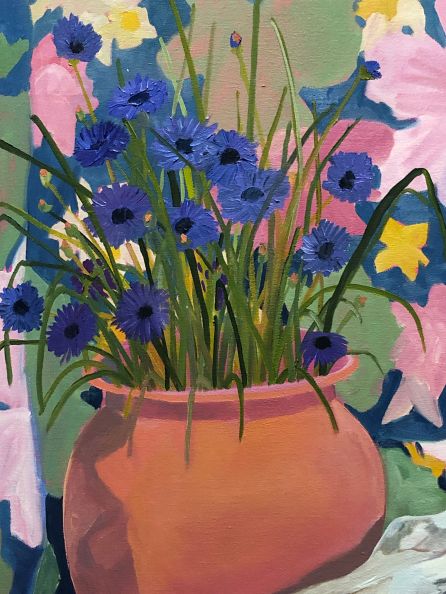 I love Kim Garza’s paintings.   The Mexican-Korean artist celebrates the female figure in a way that’s not often seen these days.  The figures in her work are browner and rounder than is commonly pictured.  I’m a big fan of Colombian artist Fernando Botero, and Garza’s paintings have that feel.  As I said, the paintings celebrate the female figure and, in all her paintings, the women are having fun rather than just posing as a subject for the artist.  Her painting Ping Pong is a great example.  The women, are round, naked, and enjoying life.  I love the feeling of joy Garza’s art puts forth.  We should all be this happy.

While The Beyond has moved from the North Carolina Museum of Art, it’s making its way around the country and is currently on display at the New Britain Museum of American Art in New Britain, Connecticut.  It’s well worth seeing and, if The Beyond makes its way to a museum near you, I recommend you go.  You won’t regret it.