My wife and I visited the Frida Kahlo Diego Rivera and Mexican Modernism exhibit at the North Carolina Art Museum in November.  It was an interesting exhibit.

Frida Kahlo was a relative unknown artist during her life.  It was not until the 1980s that her work began to be appreciated on an international level.  She remained a relatively obscure name until 2002, when Salma Hayek portrayed her in the critically acclaimed biopic “Frida.”  Today, more than sixty years since her death, Kahlo is probably the most famous Latin American artist of all time. Her paintings now sell at auction for millions of dollars and her image is recognizable around the globe.

Kahlo was famous for her self-portraits.  This particular painting was completed when the artist was just 26 years old and shows her unique style of painting.  She was self-taught and developed her style, as early Kahlo champion Surrealist artist André Breton, “in total ignorance of the ideas that motivated the activities of my friends and myself”.  Kahlo was still developing her style when this painting was made, so it lacks the surrealism while retaining the modernist feel that was prevalent at that time.

If you’re not familiar with Frida Kahlo, check out her work.  If you want to dig a little deeper, check out Frida: a Biography of Frida Kahlo, by Heden Herrera and, of course, there’s always the movie, Frida, starring Salma Hayek.

It’s been a couple months since I’ve posted anything.  After nearly two months of chemotherapy, I underwent my second stem cell transplant in November.  It was a long hard road, but I’m finally beginning to feel normal.

A week before I had my stem cell transplant, my wife and I went to the North Carolina Art Museum, in Raleigh, to see a couple exhibitions.  One was an exhibition of the art of Scott Avett, probably best known as the co-founder of the Avett Brothers.  While he’s a member of a very successful and popular band, Scott is, first and foremost, an artist, having earned a bachelor of fine arts in painting from East Carolina in 2000/.

The exhibit was really well done.  There were a couple “immersive” pieces where you could sit among the art and listen to music by the Avett Brothers.  There were a lot of large prints, but my favorites were Scott’s paintings, many of which feature Scott or his family.

One of my favorites is Black Mouse, White Mouse.  Based on a Leo Tolstoy essay, the painting is more of a metaphor where Scott questions some of the life decisions he’s made.  In the Tolstoy essay, a man is hanging from a branch as two mice gnaw on it.  Here, Scott holds the branch over his head.  On the branch, two mice are seen.  The white mouse represents spirituality and the black mouse represents materialism.  It’s interesting because despite the great success that Scott has had with his band and his art, he still holds onto his faith.  That balance between faith and materialism can sometimes be a difficult struggle and Scott depicts the struggle with beauty and humor. 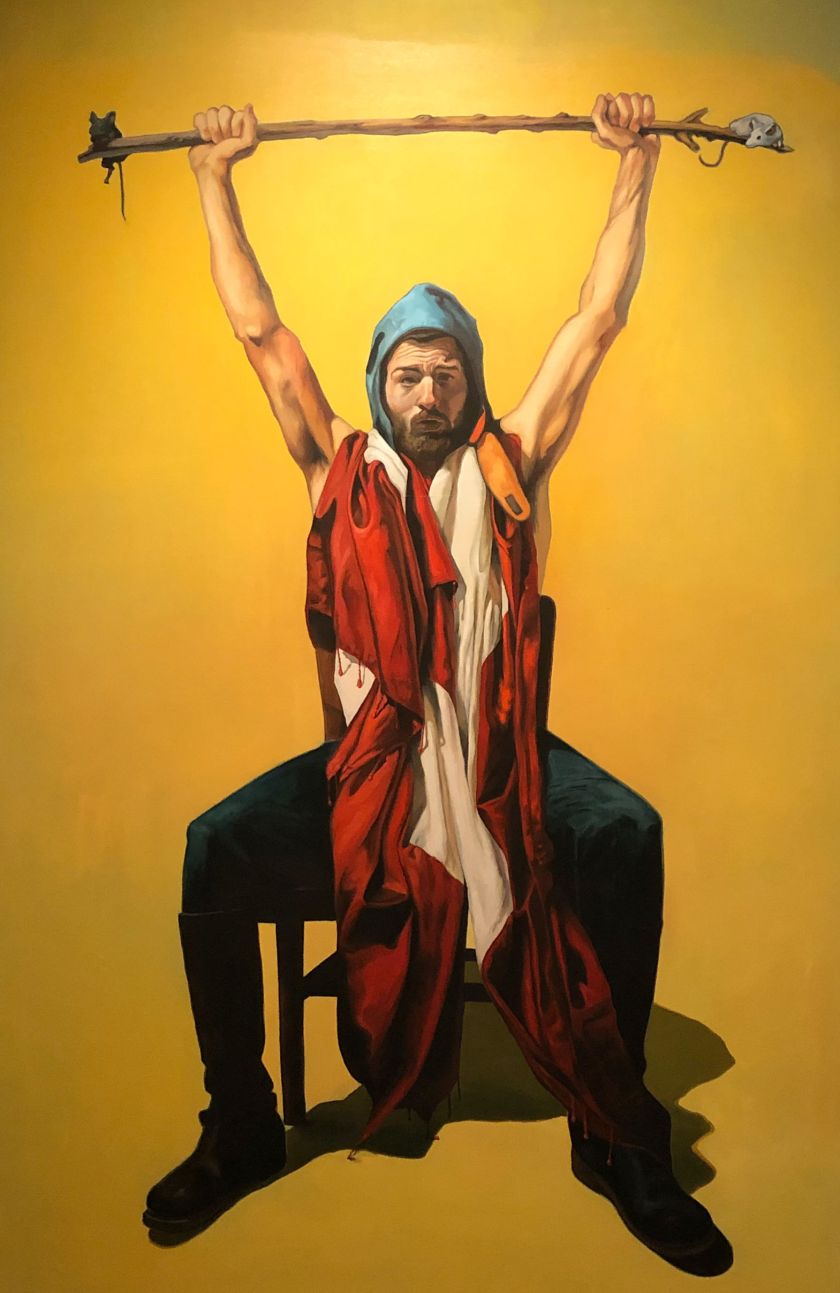